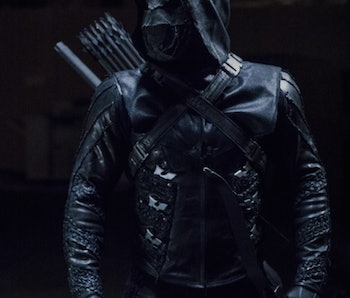 Another offspring of Ra’s al Ghul is coming to Arrow when the series returns on January 25, and she might know the identity of Prometheus. Talia al Ghul (Lexa Doig) will have a “crucial part” in the inevitable reveal of Prometheus, the hooded archer who spent all of last fall evading and fighting the Green Arrow while turning one of his proteges against him.

In Season 5, questions surrounding the jaw-dropping return of Laurel Lance (Katie Cassidy) in the mid-season finale of Arrow were quickly solved when promos for the show’s return revealed she may be a doppelgänger, most likely from Earth-2 (blame The Flash). What hasn’t ceased is speculation on the identity of Prometheus, who has yet to be revealed but totally will as the show progresses. Now, somehow, Talia al Ghul will be involved in how Prometheus is revealed.

A popular comic book character who is famously the mother of Batman’s son Damian, Talia will be the second daughter of Ra’s al Ghul to appear on Arrow. Her younger sister Nyssa (Katrina Law) appeared for a few seasons, where she briefly married Oliver Queen (Stephen Amell) and fell in love with Sara, the first Black Canary (Caity Lotz). Talia also had a prominent role in Christopher Nolan’s The Dark Knight Rises from 2012, where she was played by Marion Cotillard.

But Doig’s turn as Talia won’t be the first time the character appeared in the CW’s Arrowverse. In Season 1 of DC’s Legends of Tomorrow last year, Milli Wilkinson played a young Talia al Ghul in 1960, and thanks to messy time travel shenanigans, she learned how to fight from Sara even though Sara wouldn’t be born for another few decades.

Arrow will return January 25 on the CW.