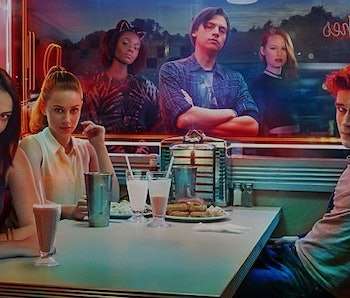 When news broke that the CW would be pushing forward a mature Archie TV series based on the long-running American comic, it almost seemed like an SNL sketch idea.

The CW’s Riverdale will be a dark, sexy reimagining that claims to be a Twin Peaks-like surrealist drama, but comes across as something more like a cross between Pretty Little Liars and The Vampire Diaries, only with the recognizable Archie gang: Archie, Betty, Veronica, and Jughead. The dissonance stems from the fact that the Archie Comics are from an older time that were found in grocery store check-out aisles and told nonthreatening stories about teens in love, eating burgers, and living in the perpetual ‘50s.

A dark, sexy drama seems almost forced and emblematic of everything wrong with the reboot culture of the 2010s. Frankly, the concern that Riverdale is another attempt at sexing up some property from a bygone era with dark grittiness isn’t so much a cynical observation, as it is an accepted market practice.

Fortunately the show is being spearheaded by Roberto Aguirre-Sacasa, the current Chief Creative Officer at Archie Comics, who has overseen Archie Comic’s amazing transformation over the last few years, and authored such Archie comics as Afterlife with Archie and The Chilling Adventures of Sabrina.

Currently, Archie Comics is in a kind of renaissance, telling diverse stories with the help of creators famous in more “serious” comic circles, like Mark Waid, Fiona Staples, Annie Wu, Chip Zdarsky, Veronica Fish, and more. The new wave of Archie comics range from modern romantic-comedies like the flagship Archie series, to the absurdest humor of Zdarsky’s Jughead, cheesecake sexiness of the new Betty and Veronica, and downright horror of The Chilling Adventures of Sabrina. Each of these books offer a unique creative direction for the famous cast.

This wave of renewed creative output from Archie Comics arguably began in 2010 with the Life with Archie series. The series told two parallel stories, one where Archie married Betty, and another where he married Veronica. Involving themes of love, marriage, life, and ultimately culminating in the death of the eponymous hero as he saves his friend-turned-U.S. Senator from an assassination attempt. Life With Archie was a bookend for the old Archie comics, and paved the way for its current run which has been both a critical and financial success.

In 2014, the publisher relaunched their flagship Archie comics, this time in a serialized, comic book format telling a linear, narrative story. The first three issues were brought to readers by writer Mark Waid (Black Widow) and artist Fiona Staples (Saga). After issue three, Staples departed, and Annie Wu illustrated the fourth issue before Veronica Fish was introduced in issue five and onward.

Archie once again tells the story of a high-school aged Archie Andrews as he recovers from a break-up with Betty Cooper, just as wealthy heiress Veronica Lodge moves into Riverdale. Waid does a good job making the formerly retro series feel very contemporary, modernizing Riverdale and its characters in a very natural way which highlights each of the characters original traits, while making them feel relatable in a whole new way. Whether it’s Betty’s tomboyishness, or Jughead’s detachment from matters that aren’t his friends or food, Archie was an astounding relaunch for the comic book company.

The seeds of Archie’s astounding new series could be seen in the works of the Archie Horror imprint, where Riverdale’s showrunner, Aguirre-Sacas, wrote the company’s first Teen+ rated series, Afterlife with Archie and the Chilling Adventures of Sabrina. Aguirre-Sacas is a veteran writer who has written for Marvel comics, as well as TV shows like Big Love, Glee, and Supergirl, a resume that feels perfectly attuned to the new Archie Comics. Between the two Archie Horror series, the Sabrina comics has proven to be a particularly inspired take, building upon Afterlife’s dark tone and daring to realize the whacky adventures of a teenage witch into a Gothic horror story. Sabrina entwines the history of the Salem Witch Trials, the works of H.P. Lovecraft, and an East Coast witchcraft made famous in 2016’s The Witch.

Through the one-two punch of Archie’s Horror imprint and the relaunched Archie series, Archie Comics has been steadily reinventing their Riverdale stable. Whether it’s bringing in humorist Chip Zdarsky and artist Erica Henderson to pen a solo Jughead series that revealed the character’s asexuality, a newly imagined Josie and the Pussycats from Marguerite Bennett, Cameron Deordio, and Audrey Mok, which similarly modernizes the female band with humor and a wry flirtation, to the digital-exclusive Life With Kevin series which follow’s Riverdale’s first gay character as he navigates a young, hipster lifestyle in New York City, Archie Comics has primed their roster to make the leap to the big screen.

Each of these series brings with it a little more maturity than what readers are used to from the Archie universe, but more importantly, a daring willingness to play with genres and conventions. Whether it’s satantic witchcraft, or slice-of-life, the surprising depth of the Archie cast, and the ease in which they lend themselves to different genres, makes the prospect of a dark, melodrama that aspires to Twin Peaks level of surreality, not that surprising.

In fact, because its helmed by the same creator who brought Archie into the Afterlife, there’s even reason to hope that the series could be not only good, but even iconic. Archie once again tells the story of a high-school aged Archie Andrews as he recovers from a break-up with Betty Cooper, but this time, you’ll get why you should care.