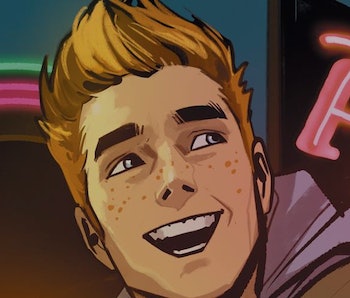 Many of us grew up reading Archie double digests, and our parents remember Riverdale, too. In their original form, Archie comics were lighthearted, full of puns, and celebrated the wholesome concept of a 1950s era neighborhood where everyone knew each other and girls just wanted to go steady with the freckled boy next door.

Well, while you were away, Riverdale went and reupholstered itself as a shinier, sleeker-looking setting for teen mayhem. With the help of the untouchable Fiona Staples (of Saga fame), the new Archie comic series was able to update its presentation without losing the core of its innocence. Spin-off comic series followed, including Jughead, Chilling Adventures of Sabrina, and Afterlife With Archie, and now television execs have taken notice of the series’ popularity. In an announcement that should surprise no one, the CW recently reported that its Archie series has begun production.

There is no better home for the revamped Archie universe, considering the hip, millennial appeal of the CW’s original series, including iZombie, The 100, and Jane the Virgin. The channel has already proved its ability to produce genre-blending, exciting television featuring sexy teenagers, and it seems poised to knock a new interpretation of Riverdale out of the park.

The CW also announced an 1880s-era show Transylvania, an as-yet-unnamed Mars colony drama, a paranoid apocalypse comedy, a paranormal cop procedural, and a show about a young woman working with a parapsychologist. New developments like Archie feel like a movement for the CW; never has being on-brand been this thrilling.

More like this
Entertainment
6.27.2022 7:00 AM
Only Murders in the Building Season 2 release date, time, plot, cast, trailer, for the Hulu mystery show
By Jeff Spry
Culture
7.1.2022 11:30 AM
35 years ago, Dennis Quaid made the last sci-fi movie of its kind
By Dais Johnston
Entertainment
6.21.2022 1:00 AM
Game of Thrones sequel could ruin the best part of the series finale
By Alex Welch
Share: