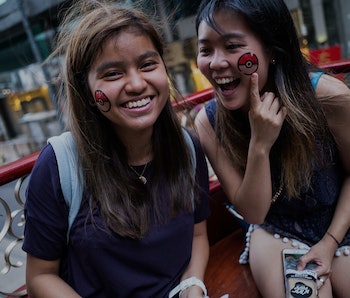 If there’s one video game that defined 2016, it’s Pokmon GO. It might just be an app on a phone, but it quickly became one of the most popular releases of the year. As Niantic fights to overcome the winter slump, it’s a good time to look back at just how much Pokémon GO has changed the franchise and what that means going forward.

Pokémon GO was first released on July 6, 2016, after being teased for almost a year. Despite getting mixed responses from critics, it was an immediate sensation, breaking the App Store’s download record in its first week. The game went on to be downloaded tens of millions of times, making $600 million in just a couple of months.

Pokémon GO once again turned Pokémon into a household name. Don’t be mistaken: The franchise has always been popular, ever since the first video game came out in 1996. There have been movies, TV shows, and a popular trading card game. But Pokémon GO was different. After the mobile game came out, Pokémon fever exploded around the globe. It was all anyone could talk about, from friends to coworkers to grandmothers. In fact, “Pokémon GO” was the most-searched term on Google in 2016. There’s even the belief that Pokémon GO’s popularity in turn helped increase hype for the latest handheld release, Pokémon Sun and Moon, which broke sales records for Nintendo.

Pokémon GO’s success went way past just being something to play on the morning commute. It genuinely inspired real change. People were walking more; businesses were promoting their in-store PokéStops; and friends, strangers, and charities formed groups to go wild Pokémon hunting. It wasn’t just a video game, it was an experience.

Unfortunately, the Summer of Pokémon Love was bound to end at some point. While the game still has millions of users, its popularity has been declining over the past couple of months. There are a few reasons for this. Kids went back to school, so they didn’t have as much free time There weren’t a lot of updates to keep players engaged. Plus, it’s been getting colder, and winter means people want to spend less time outside. Niantic has been coming up with ways to try and reboot the glory days of July 2016, partnering with Starbucks and Sprint to make indoor PokéStops, and adding new wild critters with the latest update.

This doesn’t mean it’s the end of Pokémon GO, the game is still an international sensation. There are rumors that future updates could add player-versus-player battles or in-game trading, both of which would be welcome additions to the mobile game. There’s an Apple Watch version on the way. There are hopes that Pokémon GO could go truly virtual, given how phone companies like Apple are expanding into both augmented and virtual reality at the same time.

In the end, Pokémon GO has changed the game, and its influence will be felt for years. It turned the franchise into even more of an international sensation, and it changed the way we play and share mobile games. It might just be one of the most important games of the year, and we’ll no doubt be seeing way more exciting things from Pokémon GO in 2017.