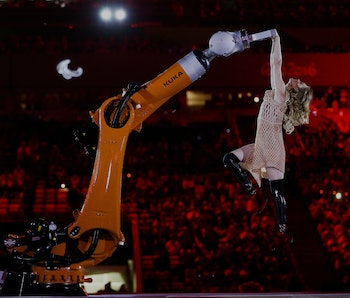 Robot automation will mean rethinking the social safety net to ensure American workers are protected against economic upheaval, a new White House report released Tuesday states. As companies switch to using artificial intelligence-powered machines instead of human workers, the U.S. government is considering how it should react to these changes. Other recommendations in the report include investing in A.I. to reap its benefits, and making sure Americans can train up for the jobs of the future.

Bad news for basic income fans, though. The report does not recommend the policy, which has become a common idea proposed by tech industry figures. It cites a July 2016 speech from CEA chair Jason Furman, who said that basic income won’t solve the biggest problem with automation: there will be jobs, but they will be high-tech jobs that many people won’t be qualified for. With that in mind, the solution is better training, rather than throwing in the towel and declaring that many will simply stop working.

“Accelerating A.I. capabilities will enable automation of some tasks that have long required human labor,” Kristin Lee, communications director and senior policy advisor in the White House’s office of science and technology said in a blog post published Tuesday. “These transformations will open up new opportunities for individuals, the economy, and society, but they will also disrupt the current livelihoods of millions of Americans.”

It’s a setback for a policy that is otherwise picking up steam with various governments and organizations. Earlier this month, the Economic Security Project announced its plans to research the policy, with backing from big names like Facebook co-founder Chris Hughes and Y Combinator president Sam Altman. In the case of Y Combinator, the startup accelerator is planning a small trial of the policy to study its effects. That may influence policy, but it does not seem that the federal government is currently interested in pursuing the idea.

The report instead suggests the government strengthen unemployment aid and benefits like Medicaid and the Supplemental Nutrition Assistance Program (SNAP). There’s also the suggestion that government could introduce new safeguards to grant emergency aid for families in crisis. If these options aren’t enough, the report recommends “more robust interventions” to safeguard against mass unemployment.

The big problem with many of these proposals is the White House is in a transition phase, preparing for president Trump to take the mantle next month, something that Facebook’s A.I. director Yann LeCun thinks could hinder their implementation.

“I think the report will have an impact on the U.S. Congress and on state government in the U.S., but it will also have an impact on governments across the world,” LeCun, who participated in the report’s workshops, said on his Facebook page Wednesday. “The report advocates for progressive policies that seem unlikely to be picked up by the new administration.”

Trump has shown himself as someone interested in hearing what the tech industry has to say, and his close tech contact Peter Thiel has spoken before about the need for government intervention in times like these, but will the report fall on deaf ears?