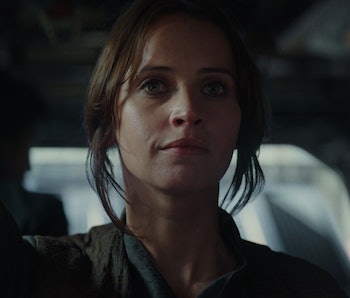 The Force is strong with a lot of people, but it’s almost absent from the characters in Rogue One. That isn’t to say the first standalone Star Wars movie lacks any mention of the ancient religion; while there are no Jedi around, the energy field that binds the galaxy together makes a few appearances in director Gareth Edwards’s exhilarating film. The most obvious comes when Donnie Yen’s Chirrut Imwe channels the power during combat, dodging enemy fire and chanting his “I am with the Force, the Force is with me” mantra endlessly. More subtle is the way that the film’s main protagonist, Jyn Erso, also uses the Force, and in a critical moment.

If you aren’t paying close attention throughout the film, you might not even notice when she channels the ancient energy. In the Rogue One prologue, when Jyn and her family are caught in exhile by Director Krennic, Jyn’s mother, Lyra, gives her a special jewelry keepsake before she meets her fate. “Trust the Force,” Lyra tells the scared, young Jyn as she places a Kyber crystal necklace around her neck. In an age in the Star Wars timeline, where such power was systematically stamped out by the Empire, the Kyber crystal was the spark that brought Jyn’s Force-sensitive aura to the surface.

Kyber crystals were the Force-attuned natural resource that Jedi used to power their lightsabers, and during Rogue One, they are also the substance mined by the Empire on planets like Jedha to power the superlaser on the Death Star. These are some very important rocks, and the Ersos know it. In the Rogue One prequel tie-in novel, we learn that the main reason Galen Erso is pulled into the whole Imperial mess with Krennic was because his scientific research focused on harvesting Kyber crystals as a renewable energy source.

The cargo ship Bodhi (Riz Ahmed) stole from Eadu has to give the Empire an access code above the Shield Gate to gain entry to Scarif. The problem: There’s a chance that the ship has been reported missing, and in that case, it’d be a dead giveaway to the Empire that something fishy is going on. Bodhi has the code because he’s an Imperial defector, but there’s a brief pause after he enters the code for access. Jyn clutches her Kyber crystal, closes her eyes, and obviously wills that the communications engineer on the other side of the comm-link will say yes, and he eventually does. It’s a quick moment of triumph before the big battle, and one that couldn’t have happened without the obvious: Jyn used what could be categorized as a Jedi mind trick to make the comms engineer let them pass.

Throughout Rogue One, Chirrut, a Guardian of the Whills, also recognizes the Force in others. He mentions a black cloud surrounding Cassian before his secret mission to assassinate Galen on Eadu, and also mysteriously connects with Jyn, first noticing her Kyber crystal necklace in the Jedha City market, despite his blindness. He later takes her hand before the big Scarif battle in the film’s climax.

Considering how Rogue One ends, we’ll probably never get to truly know if Jyn was tuned enough to the Force to really wield any Jedi-like power. It could possibly be explored in any number of official canon offshoots, like a limited comic series or book, but until then, the proof is there in the subtly jubilant moment right before Jyn and the Rebellion proved that hope might be more powerful than the Force.