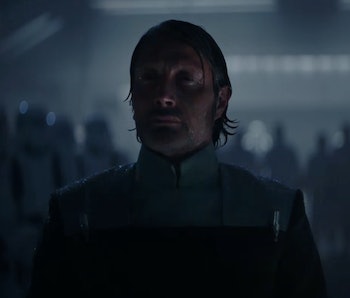 Jyn Erso’s father, Galen Erso, is still kind of a mystery to those who haven’t seen Rogue One yet. He might be a central figure in the prequel book Rogue One: Catalyst, but he hasn’t been featured in a lot of the trailers or promos for the upcoming film. It’s a shame, because once upon a time, Galen Erso was the most important person in the universe.

Galen Erso is the man who single-handedly brings the Death Star online. It’s his research into kyber crystals, the crystals that normally are used to power lightsabers, that leads to the Death Star’s laser cannon becoming operational. Without him, Darth Vader would’ve never been able to blow up Alderaan and destroy Princess Leia’s life in A New Hope. Galen is played by Mads Mikkelsen, who’s already part of Disney’s Marvel universe, having played Kaecilius in Doctor Strange. He’s described Galen as the “most guilty man in the world.” That’s because his research basically doomed an entire planet of people, but he didn’t exactly do it on purpose. Here’s are a few things we’ve learned about Galen Erso’s past, largely from Catalyst, and how those moments could affect him in the future.

1. Galen started out by trying to make fake kyber crystals.

Galen Erso wasn’t always into harnessing the power of kyber crystals to create powerful forces of energy. His first project was trying to replicate kyber crystals. Unfortunately, the project failed, and Galen learned that kyber crystals were too unique and special to duplicate. He later moved onto trying to harness the power of real kyber crystals, which led to the discovery that they could be used to make a cannon for the Death Star.

2. Galen and Orson Krennic used to be best friends.

Can you imagine? Orson Krennic, the bad guy from Rogue One, and his captive Galen Erso used to be buddies. They met in college and became inseparable. Orson even used to beat up people who criticized Galen. Orson eventually dropped out to join the military, and Galen went on to pursue his scientific interests. They didn’t meet again until Orson first tried to recruit him for the Death Star project, when Jyn Erso was just a baby.

Even though Galen is helping the Empire during Rogue One, it’s not by choice. In fact, during his youth, he was a conscientious objector, and refused to side with the Republic or the Separatists during the Clone Wars. He even punched out a scientific rival after he suggested Galen was a traitor for not helping the Republic. The only way Orson Krennic was able to get Galen to help the Empire (after the Clone Wars ended) was to trick him into thinking he was helping restore power to planets in need.

Galen Erso’s biggest flaw is that he can be a stubborn jerk. When first working on the Death Star laser cannon, under the guise of it being an energy project, he ignored warning signs from his wife, Lyra Erso, that something more sinister was going on. That’s because the calls of scientific discovery were too strong for him to ignore. It wasn’t until he finally figured out how to create the laser cannon did he uncover Orson’s true plans, and he escaped with Lyra and Jyn before his knowledge could be used to create the worst weapon in the history of Star Wars. Years later, he was kidnapped, and Jyn Erso was left as an orphan for years.

Rogue One opens December 16, with Jyn Erso and her crew working to steal plans for the very superweapon her father is bringing to life. Looks like it could result in an awkward family reunion.