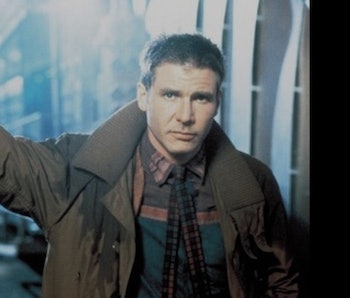 How do you make a sequel to Blade Runner? Apparently it’s as easy as picking up where the original left off. So says a new plot synopsis and trailer that were just released.

Here’s what we’re working with in the new sci-fi sequel:

Thirty years after the events of the first film, a new blade runner, LAPD Officer K (Ryan Gosling), unearths a long-buried secret that has the potential to plunge what’s left of society into chaos. K’s discovery leads him on a quest to find Rick Deckard (Harrison Ford), a former LAPD blade runner who has been missing for 30 years.

If another long-delayed sequel comes to mind after reading that, then yes, it does sound a lot like The Force Awakens. Except in this case, everybody would be looking for Han Solo instead of Luke Skywalker in the new Star Wars movie, and Ryan Goslings Officer K is like the Blade Runner equivalent to Rey.

Here’s the first teaser, where a very Deckard-like Officer K finds Harrison Ford’s character in a desolate place that looks kind of like the blade runner precinct from the original.

We finally have some iota of an idea of what the Blade Runner sequel will be about, but knowing Villeneuve, there will still be plenty of mysteries left to uncover. His previous film, Arrival can basically be boiled down to being about a bunch of scientists trying to talk to aliens, but it was so much more. Here’s hoping Blade Runner 2049 unfurls in a similar way.

The highly anticipated sequel is scheduled to hit theaters on October 6, 2017.

More like this
Entertainment
6.25.2022 11:30 AM
40 years ago, Harrison Ford's biggest sci-fi flop inspired a cyberpunk revolution
By Ryan Britt
Entertainment
3 hours ago
Next Exit is the existential road trip sci-fi fans need — here's why
By Eric Francisco
Entertainment
6.29.2022 10:30 AM
25 years ago, Nic Cage made his most explosive sci-fi movie ever — it was almost even better
By Jake Kleinman
Related Tags
Share: