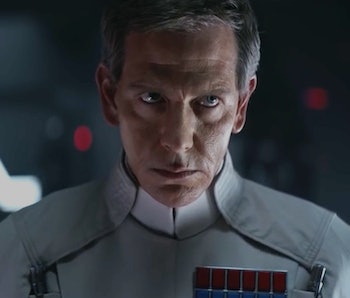 Part of the fun of watching Rogue One: A Star Wars Story is not only seeing scrappy Rebels fight agains the monolithic forces of the Empire, but also watching stooges of the Empire make huge, ridiculous blunders. Star Wars fans have long delighted in pointing out the terribleness of stormtroopers at doing pretty much anything, and the general incompetence of the bad guys in Rogue One will only add more fuel to that fire. Unlike A New Hope, stormtroopers don’t bump their heads on doors, but they still are terrible shots with their blasters.

And, this time around, their bosses — the commanders of the Empire — aren’t making great decisions either. Jyn Erso and her buddies are certainly part of the reason the Rebels accomplish their goals in Rogue One, but they had some help from plain old incompetence courtesy of the Empire. Here are the five biggest ways the Empire screwed up in Rogue One.

While Orson Krennic comes across as a slightly sympathetic evildoer, there’s no escaping the fact that like an incompetent Skeletor hench-person failing to capture He-Man, everything under Krennic’s purview gets repeatedly screwed up. Sure, we see Tarkin take command of the Death Star away from Krennic, but why not fire him all together? Better yet, considering the ruthlessness of the Empire, why not throw him out of an airlock? Keep in mind, Darth Vader killed other underlings over way less in the other Star Wars movies, meaning it’s weird Krennic is given multiple chances in this movie. Perhaps after the events of Rogue One and A New Hope, Vader was able to switch from wearing kid gloves to Darth gloves.

Speaking of the Dark Lord, while it’s a great artistic choice to use Darth Vader sparingly in a movie like this, it doesn’t make much sense from a tactical point of view. Darth Vader is the Michael Jordan of the Empire: He can get more done by himself in a day than an entire army of stormtroopers can manage in a year. Even before he turned to evil and still went by the name Anakin Skywalker, Darth Vader’s biggest flaw was always that he was almost too good at his job. With this in mind, the film doesn’t give us a clear reason as to why Vader is out of the picture in terms of helping the Empire run things day-to-day. And part of that is connected to the very real problem that Vader’s job description is super murky. Still, any way you lightsaber-slice it, bringing Darth Vader in on your “kill all the Rebels plan” as early as possible is probably the best way to go.

3. Treating its Employees Badly to the Point that Defections are Common

By all accounts, Bodhi Rook was not very high on the foodchain in the Imperial command structure, and yet, his defection is what screws the Empire over in general. How did this happen? Well, it’s one thing for the Empire to be ruthless and terrible to its subjects, but it’s quite another thing to create human resource problems so severe that lowly cargo pilots can snag sensitive data and topple your entire black ops department. Maybe if Bodhi had better health benefits or vacation time, his incentive to keep his job would have been a little higher.

2. Keeping the Senate Around

In fairness, this isn’t really the Empire’s fault in Rogue One but a mistake they made generally. Obviously, Rogue One had to adhere to the continuity of A New Hope, which means the faux-democratic Galactic Senate was still intact in this movie. But why? The excuse for dissolving the Senate has always been vaguely connected to the general populous being really afraid of the Death Star. But in Rogue One, Darth Vader and Tarkin are down with placating the Senate by keeping the Death Star secret. Again, why? Even without the Death Star, it already seems like the Empire is doing a pretty decent job of accomplishing their goals, regardless of the lack of clarity as to what they wanted longterm. Again, in fairness, Rogue One does present a lot of in-fighting inside of the Empire, so maybe this is everyone’s fault for not having a united front on the topic along with the Senate being annoying and an impediment to everyone’s evil plans.

1. Everything About How Galen Erso Was Managed

The entire plot of Rogue One rests on the audience accepting that Galen Erso was not only an invaluable scientist, but that he could 100% be trusted to help the Empire build the Death Star. His direct supervisor, Orson Krennic, totally bought Galen Erso’s bullshit, even though in the very first scene of the movie, Krennic points out that Galen is a terrible liar. Assuming that Galen really is the only person that could help make the Death Star, how was there no one around to check is work? I mean, the Empire did kill his wife and separate him for his child; I can’t think of anyone more likely to commit sabotage. It seems like Krennic should have known that too, and it should have occurred to him that it might be good idea to review Galen’s blueprints for the Death Star.

Rogue One is out now.