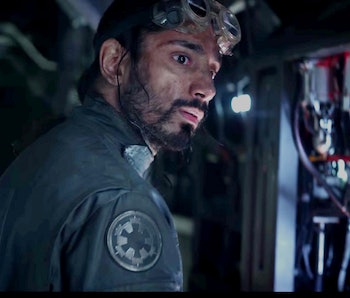 The characters of Rogue One are being billed as an unlikely ensemble of space heroes, guardians of peace and justice in a galaxy far, far away. But at least one of them will start off as an everyman. The resident pilot of the Rogue One squad is a Bodhi Rook, and he’s not related to anyone from the past of Star Wars. According to People, Actor Riz Ahmed describes the role of Bodhi as “just a cargo pilot” who find himself “in the middle of this really intense situation.” Stealing the Death Star blueprints probably is “intense,” but is Ahmed underselling the secret badass of Rogue One: A Star Wars Story?

Famous for his roles in the films Nightcrawler and The Night Of, Riz Ahmed is a 34-year-old English actor who was so pumped to be in Star Wars that he almost blew his one shot at the role of a lifetime. During the Rogue One Twitter live stream event on December 2, Ahmed admitted to overselling himself to director Gareth Edwards. Instead of sending just one audition tape, Ahmed sent about ten, all with a different take on how he could play the character. “After the tenth tape I wasn’t so sure I wanted to work with this guy,” Gareth Edwards said jokingly. In an interview with EW, Ahmed said “When Kathy [Kennedy] was calling my character a troublemaker, I think she was actually talking about me.”

Mild spoilers for Rogue One ahead.

Like everything about Rogue One, Bodhi Rook might turn out to be a surprisingly well-rounded, standalone Star Wars character. He’s a troublemaker but a good guy, a pilot, but not a daredevil. A Rebel fighter, but someone who remembers his roots. With all that in mind, here are five essential facts about Bodhi Rook.

5. Bodhi was once an Imperial pilot, still rocks the insignia.

Before becoming a part of the Rebel Alliance, Bodhi was hauling cargo for the Empire as a conscripted pilot. Fan video series Urban Acolytes pointed out this is similar to the backstory for secret-Jedi Knight Kanan Jarrus, prior to his first appearance on Rebels. That similarity probably doesn’t mean anything for Bodhi in Rogue One, but it’s interesting only because Kanan is now a blind-Jedi, and Rogue One also has a blind believer in the Force in the form of Chirrut Îmwe. But why does Bodhi still wear an Imperial insignia on his shoulder? Ahmed thinks it’s all about a reminder as to what Bodhi did in his past life. “For me personally, every day, looking at that, it reminds you of what you’ve done,” he told EW. In the movie, the reason he rocks the insignia is because he’s basically just defected to the Rebels and hasn’t had time to change clothes.

Cargo pilots aren’t exactly people who are fighting on the front lines, meaning Bodhi Rook doesn’t have a thirst for combat. This means that in a combat situation, the character can get a little “tense,” according to Kathleen Kennedy. “When you put ordinary people in extraordinary circumstances, it can freak them out,” Ahmed said. In the movie, Bodhi is probably the most stressed out character of them all. After being harassed by extremists, and getting his mind messed with by an alien slug, Bohdi has had a hard day.

2. His backstory was probably rewritten during the movie.

It seems like Bodhi’s connection the Force, and his family’s belief in it, was an aspect of his character which was added during the Rogue One reshoots. Reportedly, the idea of changing his backstory was to “deepen” the emotional resonance of the character. What this means will probably never be clear, since only the re-shot version of Rogue One will be seen by everyone. In the final movie, Bodhi’s backstory isn’t a big deal, and not made super clear. The Riz Ahmed sells the character as a real person, but we don’t get much in terms of what happened to him before.

1. Bodhi comes up with the call sign for the team.

A first for a Star Wars film: Someone will actually come up with the name for the movie during the movie. This has never happened. Luke never said, “Wow that Empire is really striking back now.” And even Anakin didn’t say, “Now feel the revenge of the Sith!” So, if nothing else Bodhi Rook will go down in Star Wars history as the in-movie movie namer.

Rogue One opens on December 16.