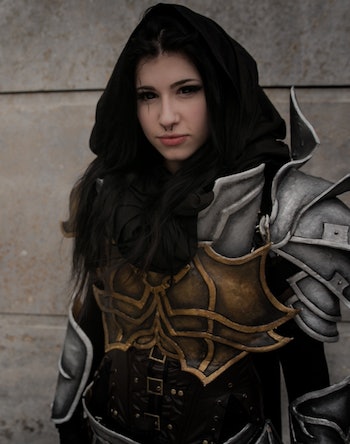 In the popular imagination, live action role play looks like a bunch of under- and over-weight men hacking sloppily at each other with foam swords while sporting Middle Age streetwear. On occasion, this stereotype is accurate, but the scenarios played out in Role Models and Knights of Badassdom don’t do justice to LARPing’s many intricacies, specifically the porous wall that exists between reality and the scenarios LARPers construct.

LARPers build out their own analog alternative realities and apply distinct social norms to interactions within them. As virtual realities proliferate, LARPers are in a unique position to serve as guides for those crossing the borders of irreality. They know that area well. And, more specifically, they are intimately familiar with how sex and violence can blur boundaries between worlds.

LARPers have created a lexicon of terms to describe what they grapple with when they occupy more than one reality. A “time bubble,” for instance, encapsulates two characters when their interaction needs to be explored at a different speed than the action occurring around them. “Physreps,” short for physical representations, are used in play if an actual object (or weapon) can’t be procured. “Bleed” describes the memories or leftover emotions that flow from LARPing reality into the real world. “Bleed” often affects players’ emotional well-being after they role-play a traumatic scenario in an alternate reality. Every LARPer has a story.

Mike and Mae Linh Fatum tell Inverse that one particular storyline demanded a lot of them. Because the event took place at New World Magischola, a four-day event set in a wizarding school, the LARPers were immersed in their fictional world for days. “In one scene during the game, a character’s sickness got too bad and that character died in the middle of the game. All of these young characters were trying to save him.” The LARPers, suddenly confronted with a surprise situation, attempted to solve the problem the way their characters would. The experience, Fatum says, became suddenly harrowing.

“This one guy who was playing an older healer, his whole purpose was to save people and yet, he couldn’t help the guy in front of him,” Fatum remembers. “It was this big emotional mess for everyone involved. Did everyone come out of that scene thinking it was a good thing? Yes and no.”

There was “bleed” and that means there was also full immersion, for better or worse. Fortunately, there is a cure for the melancholia LARPers take with them. Mae Linh Fatum describes a ritual used at New World Magischola that’s meant to center players in their real lives before and after an extended LARP. “We leave behind objects that mean something to us as humans, and during the debrief [session after a long LARP], we reconnect with the object to bring ourselves back in.” The debriefing, of course, sounds a lot like the totems used between the dream state and reality in 2010’s Inception.

Mae Linh says the debriefing process is important, and that it’s become ubiquitous in LARPing circles, because allowing oneself the time to process events in one reality before moving into the next can be disorienting. It’s a common concern among LARPers; one, an anonymous woman, says, “I don’t want anything from LARP to carry over into the real world and visa versa, for the sake of it can probably cause a huge headache.” She went on to add, “about 40 minutes after [a LARP, once], I had to sit out for a small period of time to get my head back in the game and keep myself calm.” Though not every LARP group uses totems, many require post-event letters (PELs) from players exiting LARP sessions. These letters, several LARPers tell Inverse, serve multiple purposes. They’re intended both to help players process their emotions and minimize “bleed,” and to make a collective record of what events transpired in-universe.

The two primary concepts LARPers cite when describing “bleed” include violence and physical intimacy. Each LARPer can negotiate for themselves how they want to address violence in their play, but the simulation of love and sex is another, trickier, subject. As Mike Fatum puts it, “If another player is playing their villain too well, and getting in your face, you can say, ‘Hey, break, let’s talk about what happens in this scene, but I can’t role-play this particular thing.’”

Conversations around sex in-world are a little different for many players. An anonymous LARPer, when asked about role-playing sex or romance, says, “Giving each other massages is a typical way to ‘play sex’ in German LARP[ing], and places where players can relax and get massages by professionals or semi-professionals tend to be brothels or bath-houses [while] in-game.”

Since most LARPers are loosely scripted ahead of time, the subject of sex can be addressed by LARPing couples before anything in-world begins … usually. Sometimes, as the Fatums can attest to, plotlines undulate in unexpected ways, and organic “attractions” between two characters can emerge. For a couple like the Fatums, the possibility of alternate-reality flirtations merits a lot of discussion.

“We haven’t figured the rules out yet, [but before one LARP], we decided in advance that our characters would fall for each other. However, our characters didn’t really have any interactions, so it was difficult to make that happen. My character definitely would have started a relationship with a character who was being played IRL by another married LARPer. […] It’s a little weird.” The Fatums, like all the other LARPers Inverse spoke to, value open communication before and after their play. Otherwise, the shifting realities they’re grappling with make boundaries too complex to assume anything.

Another female LARPer, who asked not to be identified, told Inverse that having conversations out-of-universe, before play begins, is paramount. “Always ask permission before roleplaying that your character can become suddenly smitten,” she said. “It might make the role play a bit less organic, but it also allows you to discuss comfort parameters.” This statement was in keeping with a trend: LARPers who play for longer periods of time more seriously are the people who value open, honest conversations the most.

But no amount of conversation can make the transition between worlds totally smooth.

LARPer George Porter says he notices the LARP-specific connotation linked to “certain smells and sounds” follows him from one reality into the next. “Even now,” Porter describes, “the smell of one character’s leather jacket, which I spent a lot of time being pressed up against during fighting, still brings back evocative memories.” Because LARPing engages players’ senses the way virtual reality currently can’t, memories get tied up with senses in the same way memories of the real world do. The two types of memories intermingle, a form of self-deception that cannot be avoided.

In a sense, marathon LARPers — some sources told us they had role-played up to 18 hours without sleeping — have already taken steps as a subculture to grapple with the difficulties many of us will experience, if virtual reality becomes as popular a form of entertainment as we’re told to expect.