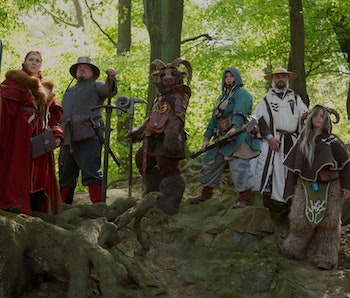 Live-action role-playing games — that’s LARPing, to you and me — have traditionally existed as a physically acted out iteration of tabletop fantasy games like Dungeons & Dragons. Typically played out over the course of a weekend, larping is as much a lifestyle as a hobby. Players often make their own intricate costumes, craft their own weapons, and create rather deep and detailed characters for themselves.

However, much like the casual or social genres have changed the face of the online gaming industry, there is a new market for multi-player, live action games that don’t require quite the investment of time or mental bandwidth as the more traditional larping events. It’s now possible to channel your inner live-action gaming nerd in much smaller, less complicated, yet fulfilling doses.

The Return of Mystery Dinner Theater

Mystery dinner theater events started to gain popularity in the late ‘70s and early ‘80s. Generally the story’s characters were played by actors, while the patrons played the role of detective, trying to suss out which performer was guilty of committing the dastardly deed, all taking place in real time. The concept has evolved over time: companies like Night of Mystery offer downloadable mystery theater kits complete with scripts, character backgrounds, and evidence kits.

For a boozy Friday night activity, corporate team-building, or even some rad version of a wedding, these D.I.Y. live-action events provide a bite-sized live action role-playing for people who wouldn’t be caught dead swinging a PVC broadsword in a city park on a Sunday morning. Instead of relying on actors, now you and eight to 88 of your closest friends assume the roles of gamemaster, characters, and investigators for three hours of what amounts to larping-lite.

Fifteen years later, many of these next-gen live action games incorporate GPS location services with proven casual game genres. Apps like Ingress offer a capture-the-flag like experience where players compete for ownership of real life locations. Zenfri Inc.’s Clandestine: Anomaly is a real-life tower defense style game, where players end up defending their own backyards from an invasion. PerBlue’s Parallel Kingdom offers an MMORPG experience that is a cross between traditional LARPing and World of Warcraft. Players assume a virtual identity, embark on quests, and even build kingdoms, all within a virtual world superimposed on the player’s real-world location.

Game developer LyteShot is looking to step up the genre as a whole by creating an entire platform for a mobile app based augmented reality gaming. Based on the platform for its Assassin game, (think Laser Tag on steroids), LyteShot is offering up their SDK for pro augmented reality developers and casual gamers alike. Using the company’s proprietary gun and puck system as a starting point, LyteShot plans on opening their own market where content creators will be able to share not only new code, but new gadgets as well.

Casual adventure games have always tended to feature interactive story lines with an emphasis on puzzle solving. The earliest computer adventure games tended to be text-based (think Zork or The Hitchhikers Guide to the Galaxy). Once the technology allowed for richer graphics, more detailed, time-consuming point-and-click games like Myst obliterated hours of gamers’ free time. However, with technologies like Adobe Flash, developers started building browser-based point-and-click games designed for a more casual audience.

For those that didn’t have the time or energy needed to get through a game like Myst, developers started building mini point-and-click adventure games like Gotmail’s legendary escape-the-room games. Instead of 50-plus hours, these pocket-sized adventure games could be completed in the span of one or two lunch breaks.

Over the past few years, real-world versions of these casual adventure games —especially the escape-the-room sub-genre — have popped up across the U.S. and Canada. For an admission fee, groups of players find themselves locked in actual real-life rooms, having to rely on their puzzle-solving skills, keen investigative prowess, and ability to collaborate in order to free themselves within the allotted time period.

For those who want the fun without all the socializing, companies like the Mystery Package Company offer a unique real-life adventure game experience. Relying heavily on the traditional adventure game elements of discovery and narrative, a series of packages containing seemingly random items (anything from 100-year-old news articles to fake fingers in glass jars) are mailed to the player’s home addresses at specified intervals.

Part scavenger hunt, part interactive fiction, the player is then tasked with researching the the items received, as a way to begin unlocking the story. As time passes, more packages show up with more clues to decipher. Rather than a win scenario, the fun of the mystery package idea is that players find themselves more and more at the center of the narrative with each new delivery. Because everyone’s real life could stand to be a little weirder.

More like this
Innovation
8.16.2022 11:15 AM
After quitting the ISS, Russia reveals its next-gen space station
By Darren Orf
Innovation
8.16.2022 11:00 AM
Scientists finally found an efficient way to recycle plastic foam — it could make them rich
By Joanna Thompson
Innovation
8.15.2022 8:30 PM
This high-tech camera may help protect our identities — here's how it works
By Molly Glick
Share: