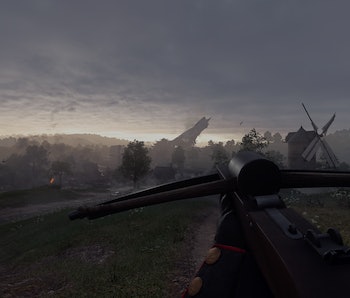 The latest update for the widely popular World War I shooter Battlefield 1 is easily the biggest the game has seen since launch, featuring the release of the first DLC map Giant’s Shadow for premium members (free to everyone on December 20) and loads of gameplay tweaks members of the Battlefield community have been asking for since the last update. There’s even a new weapon, the grenade crossbow. Unfortunately, it’s more or less useless.

The detailed patch notes can be found on the Battlefield website, but highlights include the ability for teammates to spawn into Landships, a series of fixes for the user interface across all platforms, and a much-needed set of balancing tweaks for shotguns like the Model 10-A — which, to be honest, still feels a little too powerful.

The grenade crossbow is a gadget that’s exactly what it sounds like: A wooden crossbow with a crank that can launch both frag and HE grenades a short distance. Unlike several other weapons and gadgets available in-game, it is automatically unlocked for the Support class once you’ve downloaded the patch and can be equipped in-game provided you have it installed.

While many were excited by the idea itself, the grenade crossbow hasn’t delivered the punch folks hoped for. Honestly, it’s not very useful when clearing out trenches, bunkers, and foxholes due to the inconsistent damage it puts out despite firing the standard grenade you would usually throw in combat. Most of the hits you’ll connect on enemy players will nearly always fall up short on damage, usually leaving them with 5-30 HP to mow you down with before you can swap back to your primary weapon or load another shot onto your crossbow.

That said, the Grenade Crossbow can help clear some very specific areas on the map if in the hands of the right player – like the many underground Bunkers on Monte Grappa or the C and D Conquest capture points on Giant’s Shadow.

Based on where the gadget currently stands a few days into the new patch, it’s a safe bet to say DICE will probably be making some tweaks it before the next big update rolls around namely for the HE variant. Until then though? The illustrious Grenade Crossbow is a great concept packed into a very situational package.