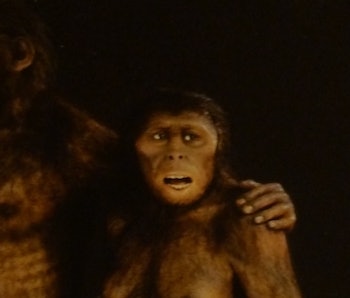 Scientists have unearthed a sexual mystery at the site of the oldest footprints in human evolutionary history: Fourteen new footprints have been found in Laetoli, Tanzania, where a set of 70 ancient tracks belonging to human ancestors were discovered in 1978. Their varying size and walking patterns have led researchers to theorize that our forebears weren’t exactly monogamous beings. It’s much more likely that a single male had his choice of several female mates.

“We are far from the traditional representation of the 1970s, with a couple of human-like Australopithecus, romantically walking arm in arm,” study co-author Giorgio Manzi told National Geographic. “This old representation is probably misleading.”

Manzi and his team published their findings Wednesday in the online journal eLife. The footprints they discovered are about 3.66 million years old, dating them to the Pliocene epoch. They believe the tracks were made by individuals of the hominid species Australopithecus afarensis — the same species as anthropology’s darling, Lucy. It’s thought that these footprints were left by the same group that made the tracks discovered in 1978.

An interpretation of the stride lengths between the tracks led the researchers to believe that they belonged to one exceptionally tall male, two to three females, and two to three juveniles. This, they argue, is evidence of the existence of sexual dimorphism among the hominids, meaning that there was a difference in size and appearance between the sexes. The extent to how different male and female A. afarensis were has long been under debate among researchers.

“The tall individual may have been the dominant male of a larger group, the others smaller females and juveniles,” the researchers write, “Thus, considerable differences may have existed between males and females. . .suggesting that reproductive strategies and social structure among at least some of the early bipedal hominids closer to a gorilla-like model than to chimpanzees or modern humans.”

This means that, like modern gorillas, ancient humans may have lived in groups with one male, multiple females, and their children.

This is a controversial interpretation, particularly because it’s so difficult to distinguish between adult female and large juvenile footprints. It’s also uncertain whether or not the newly discovered tracks belonged to the original group of tracks found by paleontologist Mary Leakey in 1978. All speculation that these groups lived out their sexual lives like gorillas relies on the existence of the other footprints.

“The size variation they report has no bearing on sexual dimorphism since we don’t know the age of any of the footprint makers,” Owen Lovejoy, one of the paleoanthropologists who reconstructed Lucy, told National Geographic. “The suggestion that somehow these five prints suggest a gorilla-like sexual strategy is — well, let me put it this way — nuts.”

Whether Lucy’s contemporaries really carried on polygynous, gorilla-like sexual practices is an unsolved scientific mystery that is likely to remain controversial, but it does provide one more piece of the puzzle to how our ancestors might have lived millions of years ago — and shed light on how different (that is, relatively monogamous) modern sexual behavior is today.

More like this
Science
6.23.2022 6:00 PM
Reptile longevity is even more complex than we imagined — study
By Elana Spivack
Science
6.19.2022 1:00 PM
What is my dog thinking? Science may finally have an answer
By Tara Yarlagadda
Science
6.16.2022 3:58 PM
8 rare species thought to be extinct that actually aren't
By Jennifer Walter
Related Tags
Share: