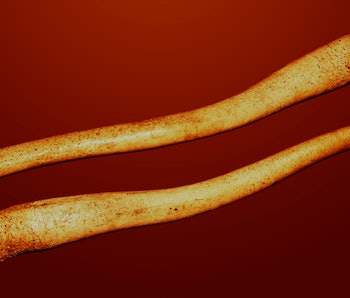 Of all of our nicknames for our private parts, “boner” may be the most misleading. A human erection, though it may look and feel ossified, contains no bone, just spongy tissue engorged with a whole lot of hot blood. But that wasn’t always the case: Scientists, investigating the penises of our primate relatives — which contain actual bones — have just discovered why the human penis bone disappeared.

Publishing in the journal Proceedings of the Royal Society B, a team of scientists report that the penis bone, or bacula, slowly disappeared from Homo sapiens because we became monogamous. The bacula, the researchers from the University of London’s Department of Anthropology suggest, is present in animals like chimpanzees, macaques, and bonobos but not in humans because these animals have a much longer intromission duration.

Put bluntly, this term refers to the amount of time the penis stays inside the vagina during sex. When the scientists compared the amount of time our male primate relatives spent inside their female mates with the length of their baculas, they discovered a positive correlation; that is, longer intromission, longer penis bone.

Seeing as humans don’t have a penis bone at all, this logic suggests that Sapiens men have an infinitesimally short intromission duration.

Not that this study should necessarily be taken as an insult to the sexual prowess of our species. On the contrary, it can be interpreted as a celebration of our evolution from jealous, mate-hoarding animals to committed, monogamous people. Our relatives with baculas are, in general, incredibly polygamous. In these kinds of mating situations, it is of the utmost importance for males to inseminate a female before any other male can. The only way to ensure this is to literally box out other males by spending more time inside her than anyone else.

The penis bone, the researchers write, “plays an important role in facilitating prolonged intromission, which itself may be a sexually selected behaviour, aimed at increasing reproductive success by delaying females from re-mating.” In addition, the penis bone is thought to provide physical support and protection for the penis while it’s doing its business as well as help semen flow toward the female’s cervix.

The mating system humans developed seemed to eliminate the need for such intense competition — and, in turn, the physical anchor our relatives used to guarantee success. Still, in light of what we know about the perfunctory sexual habits of primates and the drawn-out sexual encounters of (some) humans, the bacula-intromission duration argument may seem confusing. If human men don’t have baculas because they don’t need to keep their penises inside women’s vaginas for very long, then why does the latter still happen?

This is where human biology and culture intersect: If you take away the “cultural aspects” of human sex and see it only as a means for insemination and reproduction, study co-author Matilda Brindle, Ph.D., told Seeker, then human intromission is actually quite short — less than three minutes, by her team’s count. That doesn’t say much about our natural sexual abilities, but fortunately for human sex-havers, the loss of our baculas came with a much more useful trade-off: way better reasons for having sex.

More like this
Science
Jan. 22, 2023
Humans didn’t evolve to live in cold — our survival is a lesson in ingenuity
By The Conversation, Kyoko Yamaguchi and Laura Buck
Science
23 hours ago
Studying ancient human DNA has unlocked our origins — but the ethics are hazy
By Emiliano Rodríguez Mega and Knowable Magazine
Science
Jan. 29, 2023
NASA-funded study to research if bacteria could help form building materials on Mars
By Matt Williams and Universe Today
LEARN SOMETHING NEW EVERY DAY.
Share: