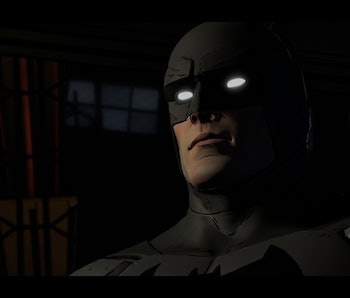 Telltale Games wrapped up their Batman adventure this week after releasing the fifth and final chapter of their episodic Batman origin story, and the critics are praising the game as one of the most inventive Batman stories in some time.

A not-quite origin story, Batman: The Telltale Series instead reinvented key characters in the Batman mythos like the Penguin, Two-Face, Catwoman, Vikki Vale, and of course, Bruce Wayne. Despite competing with decades of similar Batman stories, Telltale managed to create their own spin on a familiar tale, creating one of the best modern Batman stories.

The fifth episode, while short in length, tied up the many narrative threads running through the series while adding new layers to some of the game’s final bosses like Two-Face. One of the biggest mysteries was the identity of the mysterious leader of the Children of Arkham, revealed as a completely new villain named Lady Arkham.

Susana Polo of Polygon praised the character for her originality:

I’d love to see Lady Arkham make her debut in comics, not least of all because she’s one of the vanishingly rare female Batman villains whose sexual and romantic appeal to Batman (or one of his top rogues) is not her primary character attribute. Not to mention that her costume design is deliberately gender neutral (if only to throw the audience off when trying to guess her true identity).

Telltale’s Bruce Wayne resonates more deeply than his forebears. The formative experience that leads to the creation of his double identity gets morally muddied in this series, and from that moment on, the drama is about the kind of man/superhero Bruce and Batman can be.

The complex psychology exhibited in the series is mirrored in the sentiments of reviewer Alanah Pearce of IGN:

The finale episode of Telltale’s Batman series concisely wraps up Bruce Wayne’s tense personal and political conflicts, successfully tapping hard into empathy as it does. Episode 5, titled City of Light, is just under an hour and a half long, but it manages to neatly explore the previously elusive psychology of our main villain without straying far from Bruce Wayne’s increasingly strong drive and responsibility to resolve things.

The success of Telltale’s Batman game came from the fact that the story zagged when it was expected to zig. In that regard, having years of Batman stories to look back on was almost required for the series, since the writers knew exactly what to change from expected Batman canon that would cause the most excitement.

Batman: The Telltale Series truly is one of the most original Batman stories to date, and part of that comes from the fact that the writers have been experts in balancing what story elements needed a fresh take, and which to keep. By understanding the Batman mythos better than anyone else, the writers at Telltale were able to create a true surprise when it comes to reinventing the Batman origin story.