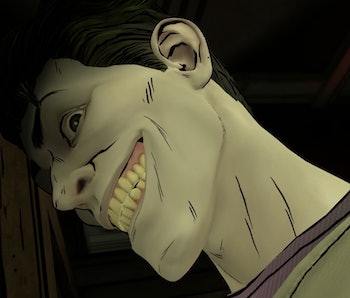 Telltale Games continues to reinvent the Batman wheel with their episodic Batman video game. After changing the origins of nearly every character — like Bruce Wayne, Penguin, Catwoman, and Two-Face — in new and exciting ways, the new trailer hints at a few more big reveals, namely, Two-Face’s police state, and on a lesser note, the Joker.

It’s honestly not surprising that we would see Batman’s most famous foe appear in Telltale’s reimagining of the Batman origin story. So before we dive into what the Joker might deliver to the game, it’s interesting to note that Two-Face still might have had the most radical reinvention in the game. As the new mayor of Gotham city, Two-Face — an actual Batman villain — runs the city now, and as Harvey Dent grapples with his demon half, the city looks like it’s tearing itself in two. Police are running the streets in the name of justice, while Two-Face flips a coin on Gotham’s ultimate fate.

Now as for the Joker, it appears that the once and future clown prince of crime is already locked away in Arkham Asylum during Batman’s early years. It’s unclear exactly how he got there, or if he’s always been there, but it looks like he and Bruce Wayne will be cellmates. Like all of Telltale’s changes to the Batman origin story, this is another plot twist that will drastically change Batman’s interaction with the Joker going forward, especially knowing that the two spent time with each other in a prison, and in the Bruce Wayne persona to boot.

Telltale’s focus on the Bruce Wayne identity has proven a smart and bold move, transforming Batman’s relationship with key villains into something more personal. Whether it’s the former childhood friend in Oswald Cobblepot, aka Penguin; Wayne’s romantic entanglement between Harvey Dent and Selina Kyle; or the Shawshank Redemption reboot starring Bruce Wayne and the Joker, Telltale’s Batman series is still the most interesting Batman story in years.

More like this
Gaming
12 hours ago
Fire Emblem Awakening Is the Most Important 3DS Game Ever
By Hayes Madsen
Gaming
9 hours ago
You need to play the best time-loop game on Steam ASAP
By Willa Rowe
Gaming
11 hours ago
MLB The Show 23 Release Date, Cover Athletes, Platforms, and Pre-Orders Explained
By Joseph Yaden
LEARN SOMETHING NEW EVERY DAY.
Related Tags
Share: