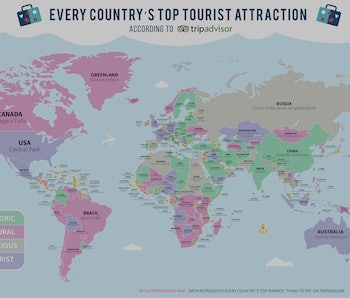 Ready to see the world? Ask a seasoned traveler for their best tips, and they’ll probably shove well-worn Lonely Planet guides in your hands. But if you’d rather crowdsource your holiday, chances are you’ll be visiting Tripadvisor. A new map produced by Vouchercloud on Monday has collected together each country’s top “things to do” on Tripadvisor.

Some of the choices are as you’d expect, like China’s Great Wall and India’s Taj Mahal. Others are slightly less conventional. South Korea’s top-ranked attraction is the Seoul Metro, but while the subway system may very well be a sight to behold, it’s probably not as breathtaking as the five royal palaces situated in the capital city alone.

Interested in a trip to the U.K.? Better put on your robe and wizard hat, as visitors believe that the Harry Potter studio tour is the best thing to do in Blighty. Forget the London Eye, Stonehenge, or even Edinburgh Castle: A film studio focused on a fictional child ranks as the number one tourist attraction.

In the U.S., the top ranked attraction is Central Park, which may spark some controversy. Manhattan’s major park is gorgeous, but with so many natural wonders in a country that stretches from sea to sea, it’s hard to say definitively that Central Park is the sole attraction you should go to.

It’s worth bearing in mind that Tripadvisor is not a totally balanced depiction of the best attractions to see on your travels. It skews America somewhat, with 22 percent of monthly unique users coming from the U.S., and 57 percent of users are female. Almost half of travelers have kids, which may also influence which places users are most likely to write about.

If you want to get the full experience, pair up the above map with the world’s weirdest tourism slogans to get a flavor for how the tourism board wants to see their country represented, then compare to what Tripadvisor users are saying. Oh, and don’t forget your translation apps!

More like this
Innovation
Jan. 19, 2023
A robot choreographer reveals why M3GAN — and all robots — should dance
By Molly Glick
Culture
16 hours ago
Lazy people swear by these 50 extremely helpful, low-effort products
By Cristina Sanza
Culture
44 minutes ago
Chinatown Is Still a Thrilling, Clear-eyed Portrayal of the Arrogance of Power
By Chrishaun Baker
LEARN SOMETHING NEW EVERY DAY.
Related Tags
Share: