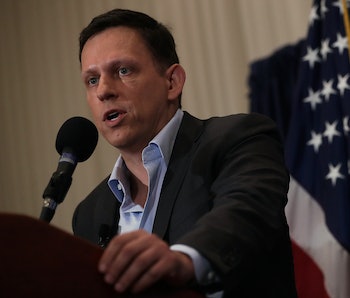 Peter Thiel has been called the “ring leader of the PayPal Mafia.” He’s an avowed libertarian and one of Silicon Valley’s biggest political donors. In 2016, he chose to donate $1.25 million to Donald Trump. Thiel’s true values and beliefs are notoriously difficult to pin down, especially given that support for Trump. Bloomberg reported that Max Levchin, Thiel’s friend and a Co-Founder of PayPal, said, “It wouldn’t surprise me if the underlying reality of his choice were the sheer contrariness of what he is doing.”

Well, as of a few months ago, it was reported that this contrarian might just find his way onto the Supreme Court. Likely or not, for better or worse, Americans have an interest in knowing what Thiel believes in. Taking into consideration his past actions, this is what we’ve been able to gather:

In addition to making a sizable donation to Trump’s election effort, Thiel was one of the many speakers at the Republican National Convention this past summer. In a short but punchy address, he criticized the relative insulation of Silicon Valley and praised Trump as someone who “builds things.” In a speech, that, in many ways, should have sounded out of place in a Republican-filled arena, he touched on stagnant wages, rising healthcare and college costs, and the wealth inequities propagated by Wall Street bankers and “Hillary Clinton’s speaking fees.” Trump, he said, was the man to fix all that.

In speaking at the RNC, Thiel has distanced himself from the vast majority of his Silicon Valley colleagues, who are so liberal that they even offered to fund California’s secession from the United States on the day after the election.

LGBTQ Arguments Are a Distraction

Thiel also touched, however briefly, on the subject of his own identity at the RNC. “I am proud to be gay,” he said. “I am proud to be a Republican. But most of all, I am proud to be an American.” This came immediately after he mentioned how he views debates about who gets to use which public bathroom to be a “distraction from our real problems.” He asked the audience, “Who cares?”

His stance at the RNC appeared to be consistent with previous statements he’s made — all to the effect that America should have better things to worry about than issues concerning the LGBTQ community. At a 2010 dinner for the American Foundation for Equal Rights, Thiel said, “I believe that gay rights and marriage rights for gay people should not be a partisan issue. Gay marriage can’t be a partisan issue because as long there are partisan issues or cultural issues in this country, you’ll have trench warfare.”

You Don’t Have to Go to College

Thiel is the founder of the Thiel Fellowship, a yearly class of entrepreneurial youth who Thiel pays to focus on their business endeavors rather than attend college. Jack Abraham, executive director of the program, has been quoted saying, “We consider ourselves a league of extraordinary, courageous, brilliant individuals who should be a shining light for the rest of society.”

The fellowship emerged out of what can only be described as Thiel’s skepticism of the college-to-career pipeline in which young American people are currently involved. Thiel told The Wall Street Journal in an interview, “Learning is very valuable. But it’s always important to ask why you’re getting an education and what you’ll do with it… It’s important to think about how your education will be integrated into the rest of your life… What are the things to learn to move toward that? Is college the best place to learn them?” Student debt also appears to be a major concern for Thiel. He said in the same interview, “Try to avoid taking on debt as much as possible. If you can go to a less expensive college, please seriously consider that.”

Thiel has even gone so far as to compare the higher education system to the old Catholic Church practice of buying and selling indulgences.

Hulk Hogan won his $140 million lawsuit against Gawker with financial help from Thiel. He largely bankrolled Hogan’s legal efforts out of what many identified to be spiteful feelings toward the website. Those feelings were driven by past reports run on his dating life, which Thiel claimed “ruined peoples’ lives.” Whatever his motivation, it’s clear the Thiel is willing to silence voices he’d rather not have talking about him.

Freedom and Democracy Are Incompatible

In 2009, Thiel penned an essay for the libertarian think tank, the Cato Institute, in which, among other assertions, he expressed that he “no longer believe[s] that freedom and democracy are compatible.” A strange position for a libertarian, indeed.

Thiel is of the belief that libertarian politics in America will be forever stymied by the out-sized, corrupt, and inefficient government that voters have allowed to exist. He called the 1920s “the last decade in American history during which one could be genuinely optimistic about politics.” Since then, he writes, “the vast increase in welfare beneficiaries and the extension of the franchise to women — two constituencies that are notoriously tough for libertarians — have rendered the notion of ‘capitalist democracy into an oxymoron.’” Thiel’s argument is that the introduction of those things into the American system has resulted in a ballooning government that is all but impossible to reign in. In a subtly-crafted sentence, it seems like Thiel would like America to second-guess giving women the right to vote.

Thiel’s potential political future may be decided soon, as he and other tech leaders are set to meet with the President-elect to discuss issues of jobs, tax reform, and immigration.

More like this
Entertainment
8.11.2022 1:00 PM
Our Flag Means Death fans are redefining historical fiction
By Dais Johnston
Culture
8.10.2022 11:30 AM
10 years ago, Jeremy Renner ruined the best spy-thriller franchise of the century
By Adrian Manuel
Culture
8.9.2022 10:00 AM
The Sandman: 11 characters pulled from DC comics history
By Robin Bea
Related Tags
Share: