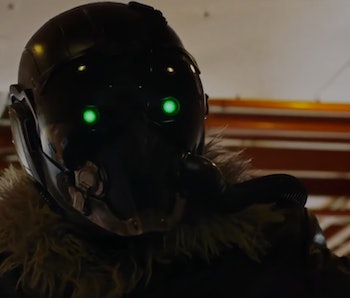 After his satirical performance in Birdman, Michael Keaton decided to strap on a pair of wings again to play the Vulture in Spider-Man: Homecoming, marking a return to major Hollywood superhero movies 28 years after he wore the Batsuit in Tim Burton’s Batman. Keaton’s grizzled Vulture is a hard contrast to the youthful, hormonal energy in Jon Watts’s high school Spider-Man movie. The Vulture is one of Spider-Man’s most significant enemies — and one of his first — cementing Spider-Man: Homecoming as an homage to the web-head’s history.

The Vulture first appeared in The Amazing Spider-Man #2 in 1963 from Steve Ditko and Stan Lee. Before taking flight, his name was Adrian Toomes, an engineer from Staten Island cheated out of his booming enterprise by his partner. When Adrian discovers his breakthrough invention, a flight harness (it was the ‘60s, guys), gives him superhuman strength, Adrian destroys his business and enters a life of crime. Far older than the youthful Peter Parker (played by Tom Holland in Homecoming), Vulture is envious of Peter’s age and once even stole his youth, making himself young while leaving Peter old and vulnerable.

Vulture’s appearance so early into Spidey’s comics actually gave Peter the idea of selling pictures to J. Jonah Jameson and The Daily Bugle, who offered a reward for pictures of the new menace. In a way, Vulture was responsible for sparking Peter Parker’s non-masked career.

Vulture is also one of the original members of the Sinister Six. Formed by Doctor Octopus in The Amazing Spider-Man Annual #1 in 1964, the Sinister Six includes Vulture, Mysterio, Sandman, Kraven the Hunter, and Electro.

In 2014’s Birdman, which Keaton earned an Oscar nomination for Best Actor, Keaton plays a washed-up actor famous for playing the superhero Birdman in the ‘80s and ‘90s. While Birdman was a blunt reference to Keaton’s star-making role in Batman, it’s a sort of irony Keaton is now playing a winged super-villain in a major Hollywood blockbuster.