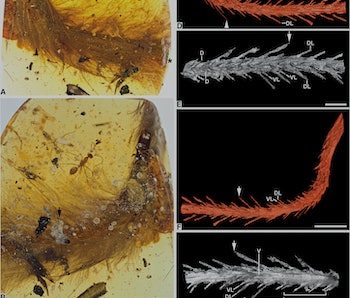 Lida Xing, a paleontoloist with the China University of Geosciences, was perusing an market in Myanmar last year when he stumbled upon something pretty amazing: a round pendant of amber, 99 million years old, containing an ancient ant, plant debris, and the feathered tail of a baby dinosaur.

It’s the first time ever that feathers have been found in amber that can be identified definitely as belonging to a dinosaur that is not a bird. That’s because the feathers are still attached to a little tail with eight little vertebrae that are jointed, not fused like they would be in a bird. According to a description published Thursday in Current Biology, that tail belonged to a young coelurosaur — a group of theropod dinosaurs that includes the tyrannosaurs and the velociraptors.

If this seems like a scene straight out of science fiction you’re not far off. Michael Crichton imagined finding dinosaur bits in amber in his 1990 novel Jurassic Park and the film that followed. No one expects to find dinosaur DNA preserved inside a prehistoric mosquito, but few people could have predicted in 1990 that we’d find dinosaur feathers exquisitely encased in amber, either.

There’s plenty that Jurassic Park got wrong, beyond the fact that DNA simply doesn’t keep over tens of millions of years. Those T. rexes and velociraptors shown in the movie almost certainly were covered at least partially in feathers, just like this little guy who got stuck in tree resin and met his untimely end.

Amazing discoveries of feathered dinosaurs, largely out of Asia, have changed our understanding of dinosaurs, and also of all the birds alive on Earth today. Birds, mounting evidence shows, actually are dinosaurs — the sole survivors of a vast and diverse group of animals that dominated the planet for many millions of years.

And feathers, which we tend to think of primarily as tools for flying, were very likely evolved for different purposes altogether. Discoveries like this one show that dinosaurs had complex feathers before they could fly, and they probably used them for staying warm and looking pretty.

The feathers on this little dinosaur tail are similar to flight feathers in a lot of ways. They each have a central shaft, called a rachis, with barbs coming off on either side, and further burbules coming off the barbs. But the rachis is flexible, not rigid like you would need for flying. The feathers overall look much like ornamental feathers you find on some birds today. The find supports the theory that barbs and barbules evolved first, before some feathered dinosaurs took to the skies and became birds.

Earlier this year, the same research team described two tiny baby dinosaur bird wings encased in amber, another spectacular example of how extraordinary amber preservation can be, even over 100 million years. Xing believes one day we could find and entire dinosaur.

More like this
Science
7.31.2022 1:00 PM
How do cats co-exist with each other? The answer may lie in their gut
By Tara Yarlagadda
Science
8.1.2022 10:30 AM
These 6-million-year-old teeth may be from Europe’s last panda species
By Elana Spivack
Science
8.4.2022 6:15 PM
3D analysis reveals a key similarity between dinosaur and bird embryos
By Charles Q. Choi
Related Tags
Share: