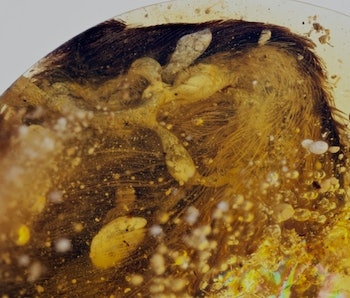 The world’s two most adorable fossils have been recovered in Myanmar.

Two partial wings were found encased in amber, left behind 99 million years ago after baby winged dinosaurs got stuck in tree resin. Unfortunately, the little guys never got a chance to grow up, flap their cute wings around, find a mate, and hatch eggs of their own. But their tiny bodies are now a remarkable contribution to shaping our modern understanding of their prehistoric world.

The wings are microscopic — less than half an inch long from end to end. They are incredibly well preserved, showcasing details of the feathers, skin, and even coloration. Never before has the construction of bird-like dinosaur wings been found in such detail, according to an article published this week in Nature Communications.

Just a few decades ago, the idea of feathered, warm-blooded dinosaurs was a matter of fringy speculation. Since then, troves of evidence of feathered dinosaurs have been unearthed, particularly in the well-preserved fossil beds of China and Mongolia. But these sedimentary fossils preserve only 2D feather impressions and provide a frustratingly limited snapshot of how the animal was held together. Fossil feathers preserved in amber can provide additional information, but until now those have only been found detached from the skin and bones of the species they came from.

These little creatures are both similar to — and different from — modern birds. The authors place the species in the clade Enantiornithes, which went extinct with most of the rest of the dinosaurs after the asteroid strike 65 million years ago, but are closely related to the dinosaurs that survived to become modern birds. The Enantiornithes looked a lot like birds with a couple key differences: They had two claws on the end of each wing, and they had teeth rather than beaks.

The researchers note that the wings show several types of feathers, and in a similar arrangement to what is seen on today’s birds, indicting that features of modern bird wings evolved many millions of years before the Tyrannosaurus rex walked the planet. (An important digression: the T. Rex was very likely at least partially feathered, too.)

The other thing that the scientists learned from these little wings is that these babies had adult-like feather structures at a very young age, suggesting that they perhaps skipped the downy phase that today’s birds grow through altogether. Speculatively, this might mean these ancient critters had less parental care or had to be prepared to take off on their own shortly after birth — a hard thing to do for a tiny thing smaller than a hummingbird, especially if the tree you find yourself on is booby-trapped with sticky puddles of resin.

The wings feed into a wider debate about the evolution of animal coverings in tetrapods. While many people still think of dinosaurs as reptilian, scaly things, there’s plenty of evidence that suggest they were actually covered in everything from scales and hair-like filaments to downy feathers and quilled feathers.

A study published Wednesday in Science Advances has shed new light on this question. Both mammal fur and bird feathers share a characteristic anatomical placode, a skin thickening in the embryonic stage that gives rise to the follicle that allows for hair or feather growth. That’s a curious thing, because reptiles are more closely related to birds than mammals, and until now there was no evidence that they had these placodes. Two ways around this: Either birds and mammals evolved this same structure independently, as a matter of convergent evolution, or their common ancestor had some genetic trait that gave rise to both hair and feathers.

And lucky us, we have an answer to this puzzler, thanks to a surprising source: a scaleless bearded dragon. While some reptiles are born without scales in a rare genetic mutation, made less rare by the fact that exotic pet breeders select for it, the scaleless bearded dragon has, well, no scales. Lead author and geneticist Michel Milinkovitch saw a naked lizard up for sale and wondered about its special genes. He bought it and studied it, discovering that a similar genetic mutation can lead to baldness in humans and mice.

It turns out that reptiles had placodes all along; they’re just a little trickier to spot. Placodes exist only at a specific time and place in the embryonic development of scaled reptiles, and Milinkovitch was able to document them in bearded dragons, Nile crocodiles, and corn snakes. What this means is that 300 million years ago, a creature walked the earth who developed the first placodes, which gave rise to scales and eventually all fur and feathers.

Scientists have yet to discover an in-between state that links scales with feathers or scales with fur, but this research adds weight to the argument that more complex body coverings evolved from reptilian scales. This makes an intuitive sort of sense — dinosaurs, after all, were probably covered in an assortment of these things. And although mammals are largely hairy beasts, you can still find the odd scaly mammal, too.

Birds are the only living creatures with feathers, and they are also the only living dinosaurs, suggesting that feathers are a specifically dinosaurian trait that evolved only once. (Pterosaurs, which were not dinosaurs, had fur-like filaments covering the skin on their wide wings.)

And while we still think of dinosaurs as a rather homogenous bunch of primitive lizards, those tiny dinosaur wings petrified in amber are proof of how diverse — and how exquisitely evolved — ancient creatures really were.