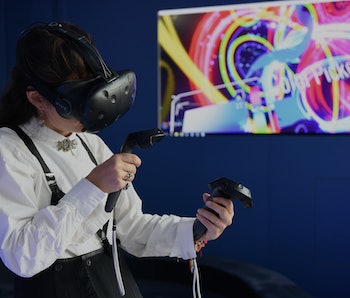 Virtual Reality is already pretty trippy, but earlier this week a number of tabloid newspapers claimed that the nascent technology is going to be much more like a drug than you might think. Outlets like the Daily Mail ran headlines saying that “Microsoft says virtual reality could make you HALLUCINATE in the same way as LSD”

The only problem is that the researcher they quoted, Mar Gonzalez Franco, never said anything of the sort — but she suggests that VR might even be better than acid.

“I don’t think [augmented reality] will be anywhere similar to chemically altering the brain,” Franco tells Inverse. “I know these comments and these predictions sound pretty crazy to these people so they can begin to exaggerate them.”

Franco made her misinterpreted comment as part of a blog post that Microsoft released in celebration of Computer Science Education Week. The Monday posting featured predictions from 17 of its female employees as to what technology in their fields will look like both in 2017 and 2027. Its attempt to draw more attention to the role of women in STEM worked — but not in the way the company had intended.

Franco’s comment, in fact, addressed only the hallucinatory nature of virtual reality.

“By 2027 we will have ubiquitous virtual reality systems that will provide such rich multisensorial experiences that will be capable of producing hallucinations which blend or alter perceived reality,” Franco wrote in her original statement.

But unlike the hallucinations caused by drugs like LSD, Franco explains that the sensory perceptions humans experience with augmented and virtual reality are all happening during complete consciousness.

“When all these inputs are aligned they provide these alternative perceptions of reality,” says Franco. “The key part is that we don’t lose consciousness. The higher cognitive functions are not altered by virtual reality.”

Franco says that, similar to robots, human senses are controlled by a number of different sensors with different latencies. It’s the combination of these sensory inputs, such as sight and sound, that shape our perceptions and can eventually result in “hallucinations, or perceptions that show the virtual as reality. LSD hallucinations, on the other hand, are the result of serotonin channels being chemically altered, changing the brain’s ability to process perception.

Current virtual reality relies heavily on visual senses, but Franco foresees that with companies like Microsoft and others working on including motion-tracking and haptic technology in virtual experiences that, within the next ten years, we will see heightened, more realistic virtual scenarios.

In fact, the future of virtual reality could produce something even better than an acid-trip: supersenses.

“From my perspective, there are many uses of virtual reality that don’t have to do with robotics. And that’s what I’m doing with my prediction of retraining perception,” Franco says. “You can train certain modalities [with VR], so we might be able to achieve super senses.”

According to Franco, this could have important implications for those with disabilities who would not be able to retrain their senses without the extra modalities of virtual reality.

Virtual reality has already proven a boon with helping robotic prosthetic users gain control over their limbs. And researchers in London have been chipping away at using haptic touch — the very technology Franco describes as the future of augmented reality — to give users a “sixth sense” of ultrasonic touch.

“The field of perception neuroscience is progressing a lot thanks to virtual reality,” she says.

When asked about potential health effects of immersive VR, Franco responded that most of the known side-effects, such as nausea and dizziness, are the results of virtual reality telling your senses and your physical presence telling you another. Eventually, researchers might be able to devise ways to help you adjust modules like your vestibular senses to virtual reality movement.

Of course, a lot of these implications are still nearly a decade away from implementation. Franco says the focus in the immediate future is integrating better motion tracking into VR technology in order to allow the kind of avatars envisioned by companies like Oculus the next generation of VR interaction.

“Once you have body tracking you can have an avatar that represents you in a first-person perspective,” she says.

More like this
Gear
Oct. 1, 2022
Everything you need to know about Meta’s Quest 3
By Jackson Chen
Science
Sep. 29, 2022
DART: NASA's first asteroid defense mission isn't over — one critical step remains
By Doris Elín Urrutia
Science
5 hours ago
Even if geoengineering worked, over half the world could keep heating up
By Patrick W. Keys, Curtis Bell, Elizabeth A. Barnes, James W. Hurrell, Noah Diffenbaugh and The Conversation
Share: