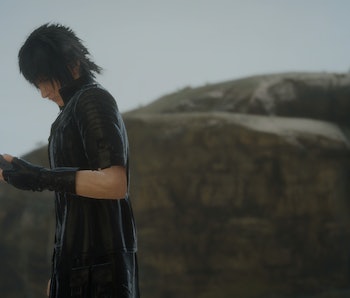 In a move unprecedented for the Final Fantasy series, Square Enix announced today that future updates in the coming year will not only include UI improvements and gameplay enhancements, but also some tweaks to the storytelling itself. In other words, we’re getting a plot patch.

Specific details of the updates are a bit scarce, but a post on the Square Enix blog written by game director Hajime Tabata vaguely overviews how key scenes will be added to enhance the story.

In addition to the previously planned expansion packs — some of which are individual episodes presumably about each member of Noctis’s entourage — free updates throughout the year will focus on “adding gameplay enhancements for Chapter 13” and “buffing ring magic” but also more story-focused additions: “[W]e’re hoping to delve deeper into the story, adding scenes that will give you new insight into character motivations, such as why Ravus walked the path he did.”

Chapter 13 (and we’re avoiding spoilers here) is this game’s instance of a common Final Fantasy trope where the main cast gets imprisoned or otherwise stripped of its gear and has to use its wits or fist-focused combat to get out. And Ravus is Noctis’s would-be brother-in-law that represents something of a minor antagonist a la Seifer from Final Fantasy VIII, so the idea is we’ll eventually get more cutscenes featuring and/or about him to better explain why he is below average for a brother-in-law. And note that the vague language Tabata uses doesn’t mean that new scenes will be exclusively Ravus-centric.

What all this will ultimately means is that gamers will get the first instance of a Final Fantasy game essentially changing its story post-release, which is unprecedented for the non-MMO iterations of the franchise. Sure, we’ve had things like ports of the OG Final Fantasy Tactics game, eventually subtitled War of the Lions, that included some great new animated sequences using the original art style, but these will be straight-up storyline alterations not unlike what games like Mass Effect 3 have done in recent history.

There is certainly no cause for concern, as this tells us that Square Enix just wants to improve its storytelling in the game. It might even be a necessary step, as they created something of a narrative clusterfuck by segmenting the overall story into separate chunks in Brotherhood and Kingsglaive. Neither is “necessary” to watch, but one offers an intimate look as to what is happening just before and during the beginning of the main game back in the home city and the other basically explains why the bros are such good bros aside from the fact that everyone but Noctis is getting paid to be there.

Other notable updates include “making certain key characters playable” and “the possibility of customizable avatars” … which … I thought you could already do via clothing? But most interesting will be a few New Game+ options, like “low-level runs and god mode” but also the option of carrying stats over to new runs. All of these would be great for replayability, which has long been a struggle for a franchise where any and all replayability came exclusively from years of pent up nostalgia.

Also very cool are “new bosses with exclusive rewards and achievements, and limited-time hunts,” which would continuously drag lapsed players back into the fray for timely rewards.

Updates like this really don’t come as a surprise considering they’re really pushing FFXV as a “a Final Fantasy for fans and newcomers alike,” so it stands to reason that they’ll want to make it as accessible and comprehensible as possible. Look for more information in the coming weeks and months, and maybe even a FFXV Holiday Pack sooner rather than later.

More like this
Gaming
Jan. 27, 2023
Dirge of Cerberus is still the most incoherent Final Fantasy game ever
By Willa Rowe
Gaming
21 hours ago
The Best Video Game Ever Made Just Got Its Own Holiday
By Hayes Madsen
Gaming
Jan. 26, 2023
Here's exactly how to beat all three phases of Forspoken’s final boss
By Hayes Madsen
LEARN SOMETHING NEW EVERY DAY.
Related Tags
Share: