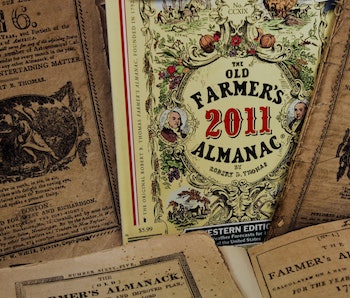 To help farmers plan out a successful harvest, the Old Farmer’s Almanac has some handy guidelines on the best time to prune the crops. According to the American publication that’s been delivering pseudo-scientific weather predictions and strange cultural projections since 1792, it’s best to tend to the plants during the year’s time periods that fall under the Aries, Leo, and Sagittarius astrological signs. And don’t dare do it when the moon is waning — that’s one sure way to stunt growth.

Sounds pretty wacky, right? Well that’s because the Old Farmer’s Almanac is rife with absurd tips on how to go about various facets of life. It makes sense considering its dated methodology for formulating these predictions. And as totally wrong it might be, the book serves as a cultural relic people just can’t let go.

Among other novelties, the Old Farmer’s Almanac predicts that people are going to start adopting “his and hers” houses, with “separate entries, bedrooms, kitchens, and living rooms.” You know, classic separate but equal housing in “cute” hipster form. The Almanac also forecasts people will be moving into “partially submerged floating homes,” whatever that even means.

It’s not clear what’s happening in that picture. It looks like the turkey is set to take a nice bite out of Little Susie Redcoat’s abdomen. That is, if she doesn’t fall off that pumpkin first. Maybe it’s another prediction. Maybe the Almanac was trying to say that turkeys are going to fight back this year.

But the Almanac’s main selling point, shockingly, isn’t its bold, forward-thinking predictions that people are going to start using chromotherapy bathtubs where the water changes color (admittedly, that does sound kind of cool). No, the Old Farmer’s Almanac was made famous by the long-term weather predictions given each year of its publication. They are designed to make farmers aware of deviations from average weather patterns so they can plan their ahead with their agriculture.

For example, in 2008 the Old Farmer’s Almanac said the planet was about to enter a period of global cooling? If only that hadn’t turned out to be totally batshit, the world would be enjoying much nicer climate right now. And that’s the thing: The Old Farmer’s Almanac is in no way accurate with its weather predictions. Shockingly, it’s patented mix of meteorology, Zodiac signs, and moon phases doesn’t make for quality forecasts.

That’s bad news for farmers, right? Wrong. See, real farmer’s don’t actually use the thing because they know it’s bunk and they can get better, more immediate, and more reliable information elsewhere. Lindsay Lusher Shute, executive director of the National Young Farmer’s Coalition, told Modern Farmer that she “and her husband, Ben, who runs a 70-acre vegetable farm in Clermont, New York, mostly rely on forecasts from the National Weather Service, Weather Underground, and their own personal weather station (when it’s working).” The Almanac is hardly even applicable to farmers like the Shutes. It turns out that the weather forecast for three months from now for an entire region, like the Northeastern United States, isn’t that useful when all you really care about is whether it’s going to rain in Clermont tomorrow.

All of this naturally raises the question: How is this still a thing? The answer, it seems, is cultural significance. Like daylight savings time, the Old Farmer’s Almanac is an institution unto itself. It’s stuck around this long because, well, that’s the way it’s always been. The 2017 issue, the 225th if you’re counting, ran letters from U.S. President Barack Obama and Canadian Prime Minister Justin Trudeau, each praising its longevity and cultural impact over the years. But why? It’d be foolish to think that Obama and Trudeau actually curl up with a blanket and read this thing.

That’s the power of tradition. It gives outmoded things an excuse not to die so they can continue to please the ever-shrinking group of people who actually partake in them. The onus, then, is on the rest of us, those who (correctly) think partially submerged floating homes are a terrible idea, to ignore them into extinction.