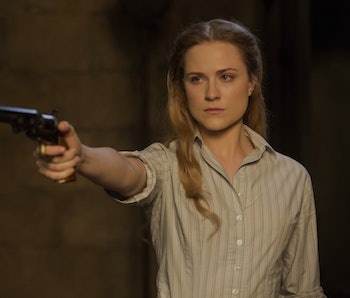 HBO’s Westworld wrapped up its first season with more than just a bang in “The Bicameral Mind.” After all the twists and turns, Ford’s narrative definitely led to some violent delights with equally violent ends. But what happens next? HBO already gave the green light to Season 2, and considering the first season left off on such a tantalizing cliffhanger, here’s where Westworld could go next season.

That last scene was incredible, not only because it was horrific visual of what it would look like if a bunch of robots slowly walked out of a forest with the sole purpose of killing you, but also because we didn’t see how it was carried out. The immediate aftermath of Ford’s grand and bloody exit from the show — just like his old pal Arnold — wasn’t shown, so we can expect so see a continuation of the board of directors and their unfortunate plus-ones running for their lives after the robots in cold storage rose up against them in Season 2.

Also, Maeve still might join back up with Hector and Armistice after she finds for her daughter in the park. And we’ll get to see what happened to the Man in Black after getting shot by one of said robots emerging from the forest, which reminds us …

William is the Man in Black! Ed Harris is slated to return, but what’s to say that Jimmi Simpson as a young William can’t return to fill in the three decades between his arrival and potential death at the park? There’s a lot of unclaimed time in between for the show to fill, and Simpson is such a versatile actor that it would be incredible to see this show’s version of a Walter White-esque transition from a curious park observer to a reprehensible bad guy drunk with power and regret.

Nolan loves to play with time and how perceptions change over that span, and William has been the one human character on the show that is gradually allowed to change as opposed to the abrupt narrative changes of the hosts. Seeing the character’s slow degradation teased out in Nolan’s patented disorienting narrative style would keep the show fresh.

Something close to the Second Season of Lost

Since J.J. Abrams is involved in Westworld as executive producer, the inevitable Season 1 resemblance between the HBO show and his other zeitgeist-y sci-fi hit, Lost, go beyond surface characteristics. Both are shows based entirely on an increasingly absurd set of mysteries and reveals deliberately meant to obfuscate its viewers — that is until the answers appear, which then recontextualize whatever came before it. This is much to the chagrin of some viewers who don’t enjoy the fact that the show is about its characters trying to solve a puzzle but also its viewers trying to solve the puzzle of the characters doing the same.

Lost famously ended its exhilarating first season with a gloriously batshit shot that wrapped its nascent mysteries up nicely, but also managed to blow the door open for even more questions about where Season 2 would lead. If Westworld is indeed trying to grow beyond the ensemble and ideas it set up in its first season, then adding to it in Abrams-esque ways — flashbacks, flash-forwards, flash-sideways — would be a suitable way to build upon its simple premise with an increasingly complex execution.

Co-creators Jonathan Nolan and Lisa Joy have said they’ve already mapped out up to five seasons. They at least seem to have a plan, which would undercut what was perhaps Lost’s biggest disappointment. Abrams’s previous show presented eager viewers with ample amounts of cool and confounding stuff without ever really knowing where it was going. If Westworld is anything like its unstable antagonist Dr. Robert Ford (RIP), they know exactly what the ever-evolving plan will be.

Unfurling the larger world of the show would mean adding different themed parks, which were a part of the original 1973 movie. Delos is a big ugly and greedy conglomerate, so it’s obvious they would want to make even more money by offering options to people whose idea of a good time isn’t the Old West. Nolan told the crowd at New York Comic Con earlier this year that they wouldn’t go to specific worlds when asked if future seasons would explore outside Westworld. “You said Roman World and Medieval World, right?” he said to the person asking. “No.”

He’s technically right since we got a glimpse of what could basically be Samurai World towards the end of “The Bicameral Mind.” A key factor would be for Nolan and Joy to tap into the same masculine American subtext of what the Old West meant for Westworld. Yes, Season 1 has dealt more with the themes of artificial intelligence instead of setting, but there’s still an obvious recycling of the ideas of a “new frontier” at play. So where would it go after this to push that underlying theme? We’ll have to wait for Season 2 to find out.