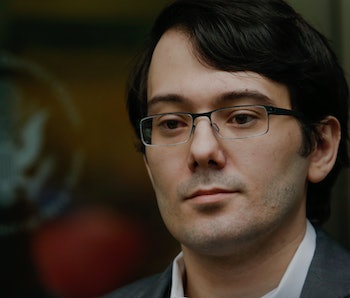 Notorious Wu-Tang fan and Big Pharma jerk Martin Shkreli has made a ton of money off a simple economic premise: Buy cheap, sell high. Unfortunately, this strategy has worked very well for him, and there’s not much America’s angry drug-needing population can do about it, seeing as he’s out on bail after being arrested for fraud. What they can do, however, is take solace in the recently uncovered scientific evidence, dug up by a bunch of Australian high school students, proving that their hatred for him is absolutely justified.

The kids have just demonstrated how cheap Shkreli’s drugs are to manufacture. For just $20, they produced 3.7 grams of the active ingredient of Daraprim, one of the anti-parasitic drugs sold under his drug firm, Turing Pharmaceuticals. At the rate Shkreli is marketing his drug, those 3.7 grams are worth somewhere between $35,000 and $110,000. Given these figures, one student-made pill would cost $2, and one of Shkreli’s pills would cost $750.

The students, from Sydney Grammar School, announced their work on Wednesday at the Royal Australian Chemical Institute NSW Organic Chemistry Symposium. Their research was done with the help of their chemistry teacher together with the University of Sydney chemist Alice Williamson, Ph.D., who collaborated with them through a website called Open Source Malaria, a platform for treating the mosquito-borne disease using readily available drugs. Testing the substance using a technique called spectroscopy showed that the compound they synthesized from scratch — pyrimethamine — was exactly the same as that in Shkreli’s drug.

At first, the students’ success appears to be a victory for science and a huge fuck you to Shkreli. But unfortunately, their low-cost method (an alternative to Shkreli’s, which is also too dangerous to carry out in a high school lab) can’t simply be adopted by other American manufacturers and scaled up, thereby outcompeting Daraprim sales; Shkreli’s firm has employed closed distribution, a rule that effectively cuts off all attempts to make a biosimilar generic product for a cheaper price. If the kids really wanted to screw Shkreli over, they’d have to test their method and compound in clinical trials against Daraprim. That, in turn, would require Shkreli to agree to allow researchers to use his product in those trials — a request he has every right to refuse, if he wants.

Despite these seemingly immovable obstacles, the kids should be commended for their efforts. They didn’t just help develop a new method for creating a drug that the World Health Organization categorizes as an essential medicine; they also proved, using a bit of pennywise chemistry, just how much of a greedy, money-sucking pharmaceutical vampire Shkreli really is.

Not that anyone needed more proof. In a series of tweets responding to the students’ findings, Shkreli reminded the internet just why he’s the “most hated man in America” by gloating about his awareness of the low-cost options.

While the kids had originally set out to inspire other drug manufacturers to throw down the gauntlet against Turing Pharmaceuticals, it’s hard not to hope, in light of Shkreli’s nasty tweets, that they’ll take up the fight themselves.