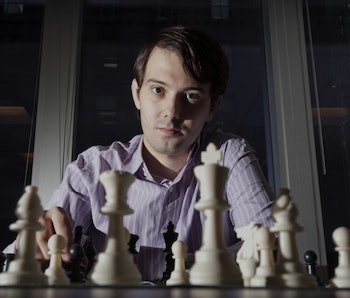 Wu-Tang Clan’s fans were right. When the hip-hop supergroup announced they’d be selling the complete rights to their new album to the highest bidder, many worried that some obnoxious plutocrat might buy it and keep it all to his or herself.

Well, worst nightmares do come true! Now we know that the mysterious buyer announced Nov. 24 as having paid over $2 million for the album, entitled Once Upon A Time in Shaolin, was none other than Martin Shkreli, the Turing Pharmaceuticals CEO who shot to instant infamy after he raised the price of a drug important for fighting parasitic infections by 5,000 percent.

On Wednesday, many headed over to his YouTube live stream, hoping to hear the album that’s been unheard by the public. “I’d rather have a wu tang album over a cure for cancer any day,” one person commented on the live stream. “Play the wu tang mayn,” another chimed in. “WTFwith these nasty rockers, we’re here for wutang,” commented another — Shkreli had been playing guitar-rock, not the Wu-Tang abum people came to hear.

Far be it for us to dispute the decisions of the Wu-Tang Clan. RZA, Method Man, Raekwon — these guys are geniuses of the highest caliber. And, hell, why not give this new business model a shot, right? RZA told Forbes they wanted to create something that would be as valuable and unique as “the scepter of an Egyptian king.”

When you put it that way, it is pretty cool. And the early rumors that Quentin Tarantino might buy Shaolin meant the sale could have a certain poetry to it. One great artist, known for his love of ‘70s music and film, put his earnings behind the work of similarly inclined artistic legends. At least we could trust the director of Pulp Fiction not to waste the whole, incredible opportunity of owning the full rights to a Wu-Tang Clan album. He would probably listen to it then put it online for the rest of us to enjoy. Though given his track record on the copyright law, that may be a little optimistic.

Put all that aside though, because Tarantino didn’t buy the record, Shkreli did. And Shkreli is the kind of businessperson that deserves to be the butt of a Bernie Sanders joke, not the sole owner of a world-class piece of art. In the Wu-Tang Clan’s defense, even they seem to be a little disappointed with the result of the auction. According to Bloomberg Business, after news of the sale leaked, RZA quickly emailed out a statement: “The sale of Once Upon a Time in Shaolin was agreed upon in May, well before Martin Skhreli’s [sic] business practices came to light. We decided to give a significant portion of the proceeds to charity.”

Oh, well. RZA is referring to the price-gouging of the drug Daraprim that fights infections mentioned above. Fans remember, and have not taken today’s news well.

Of course, Shkreli was not exactly known as a beacon of honesty before his most recent truly miserable endeavor. He was basically fired from a company called Retrophin in 2014 for misusing company funds. These activities also prompted the U.S. Attorney for the Eastern District of New York to launch an investigation against him in January 2015.

So, he’s basically everyone’s least-favorite corporate shill (albeit with a livestream on YouTube, for whatever that’s worth).

What really matters now are his plans for the album that he paid so much for. He hasn’t announced any formal plans yet, but considering he conclusively decided to buy the album only after one of the people in charge of the auction told him it would make famous people want to hang out with him, we can’t say we’re optimistic it will be available to stream anytime soon. Also, he has a recent history of savvy-to-the-point-of-predatory investing patterns.

Stay strong, Wu-Tang Clan. You may not have found a Pharaoh to buy their album, but in the end you have the right to do what you like with their music. Just — shit, guys, next time, protect ya neck.

More like this
Gaming
Jan. 24, 2023
Fortnite is about to get a Wild Dreams concert from The Kid LAROI
By Jess Reyes
Culture
Feb. 4, 2023
Clever things that make your home & car 10x more organized with almost no effort
By Christina X. Wood
Culture
Jan. 28, 2023
These 50 cool things for your home have fanatical Amazon reviews
By Christina X. Wood
LEARN SOMETHING NEW EVERY DAY.
Related Tags
Share: