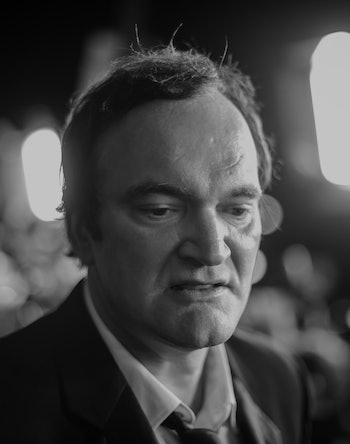 Quentin Tarantino has made a career out of unexpected scores. His most recent movie, Django Unchained, about a freed slave in the Antebellum South who teams up with a bounty hunter to rescue his still-enslaved wife, broke virtually every convention about what a blockbuster could be. And yet! “I made almost a half a billion dollars around the world and was actually even more of a success and greeted with more open arms in other countries,” he told GQ in a just-published interview.

He also addressed the roots of his commitment to the Black Lives Matter movement and his unabashed egotism. The man who made Pulp Fiction and Reservoir Dogs is set to release his eighth movie, The Hateful Eight, on Christmas. He’s not slowing down yet though. The “director of his generation” (GQ’s assessment; no quibble here) announced he won’t be happy until he has more writing Oscars than Woody Allen.

On writing Django and being inspired to make another movie like it.

“I liked the idea of creating a new pop-culture, folkloric hero character that I created with Django, that I think’s gonna last for a long time. And I think as the generations go on and everything, you know, my hope is it can be a rite of passage for black fathers and their sons. Like, when are they old enough to watch Django Unchained? And when they get old enough — 14 or 15 or something like that — then maybe it’s something that they do with their fathers, and it’s a cool thing. And then Django becomes their cowboy hero. And so I like the idea of maybe like a series of paperbacks coming out, Further Adventures of Django, and so I was really kind of into that idea. And then I started writing it as a book, as prose. And that’s what ended up turning into The Hateful Eight. The number one thing I had to do was get rid of Django. [laughs]”

Who could Tarantino possibly be competitive with?

“I think my real ﬁlmmaking peer is probably David O. Russell right now — i.e., his ability to write, the movies he does, and his relationship that he has with the actors that he likes to work with. And I think along with myself, I think he is the best actor’s director out there. And I feel he’s pushing it. I actually think, as terrific as Robert De Niro was in Silver Linings Playbook, I think his cameo in American Hustle is maybe the best work he’s done in the last seven years. It’s a small little thing, and he was a diamond bullet in it! He was perfect. And you would think, Oh, you never need to see De Niro ever play a mob guy again, but you never saw that guy. And that was a fucking cameo! But no one treated it like a cameo. And the fact that, like, they have that trust and that relationship is just such a lovely thing. I think [Russell] and Jennifer Lawrence are the closest thing we have to Bette Davis and William Wyler. I mean, it’s fucking exciting.

How his early days as a nobody who got in trouble with the police taught him cops will fuck with you if they can.

“Oh, very much so. I mean… [pause] I still touch base with that person all the time, and I still have their thoughts. I still have their perspectives. I mean, you know, the way the police are killing black males out there, unarmed black males, shooting them down, um…you know, it’s a different story for me now. All right? The police protect this house. And I need them to do that. And I want them to do that. If I have a problem here, if I think somebody jumped my fence and is fucking around on my property, I’m gonna call the cops. But I’m rich now. I’m rich and white now. All right? When I was in my twenties, I wasn’t rich. They looked at me, and they saw a criminal. They saw a scumbag. They saw someone to be fucked with. I went through a county-jail system four different times. I saw how the county sheriffs talk to you when you’re down there. I saw what it’s like when you have absolutely no power and you’re on the wrong side of the social strata, and what they think of you, and the judgments they make of you. I see that, and I see that now. So when I watch this stuff, I say, ‘God, shit, that, you know, that could have been me in 1984. That could have been me in 1986.’ Now, I have white skin and they have black skin, and that’s a huge difference.”

By now, Tarantino’s involvement with the Black Lives Matter movement has become a saga in itself. After he suggested at a New York rally that police were responsible for “murdering” innocent civilians, numerous police unions announced a boycott of his movies. That move gained some national traction, but he seems unperturbed.

The interview wrapped up on a lighter note.

Have you seen The Wolfpack, the documentary about the kids who love and reenact your films?

“Yes, I have. Those kids are fucking awesome, man. I think they’re fantastic. And, like, you know, and literally, watching acting out the scenes, that was so entertaining and lovely and glorious. But watching them writing the script, i.e. just jotting it down, but the way they talk about it, it’s as if they wrote it. ‘I’m working on the script. I’m writing the script.’ And I know exactly what they mean! I got it. Watching the kid writing the dialogue down word for word on a yellow legal pad was fucking fantastic.”

They actually are pretty fucking cool.