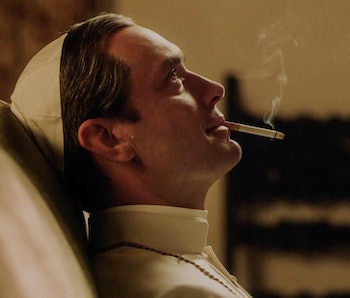 Religion and vice have much more in common than most believers would like to admit. Some people get high on Christ; others bet their souls on salvation. And for many, a good orgasm is heaven on earth. These turns of phrase are not just linguistic coincidences; as it turns out, they have a neurological basis. Similar parts of the brain’s reward system, a new study reports, are triggered by sex, drugs, gambling, and God.

In the journal Social Neuroscience, researchers from the University of Utah and Harvard University who studied the brains of religious Mormons report that spiritual experiences activate neurological reward circuits in the same way that many of our favorite vices do. It’s likely for this reason, the authors write, that many people experience “religious and spiritual euphoria.” Until now, scientists haven’t been able to figure out what it is about religion that people find so rewarding. While this study doesn’t address the more esoteric elements of the spiritual experience, it does offer a neurological explanation for why the God-fearing faithful persevere.

In the study, the researchers analyzed brain scans from 19 devout Mormons taken as they engaged in “charismatic religious joy,” which is colloquially known in that community as “feeling the Spirit.” Mormons were chosen as study subjects because these feelings of euphoria are a central part of their religious theology and practice, the researchers write. The brain scans showed high activity in a part of the brain called the nucleus accumbens — a walnut-shaped nugget that is sometimes referred to as the neurological “pleasure center.”

It makes a lot of sense, if you consider the effects religious stimuli had on the participants. While undergoing the fMRI scans, they watched videos designed by the Mormon Church to evoke strong emotions, listened to religiously-themed quotes and scripture, and read prayers. In an interview with ResearchGate, the study’s senior author, neuroradiologist Jeffrey S. Anderson, Ph.D., reported that many “were in tears after the scan.” People have been known to cry when great sex, a big win, or really strong drugs leave them feeling emotionally overwhelmed. The brain’s idea of a reward, it seems, can be incredibly intense.

Knowing about the neurological basis of the spiritual experience sheds some light about why faith can be so powerful and, more abstractly, how the world’s opposing religion are actually very similar in their methods. Religious training, Anderson explained to ResearchGate, might be very similar to classical conditioning, a ubiquitous form of teaching that teaches people to associate a stimulus with a reward. Perhaps, in the same way cocaine users learn to crave the drug because it feels good, the faithful — regardless of their church — associate overwhelming joy with attending services or successfully adhering to religious doctrine.

When Karl Marx dismissed religion as “the opium of the people” in 1844, he had no clue about its molecular effect in the brain but had astutely observed its effect on its adherents. If this small study’s results are any indication, his declaration was quite prescient: Religion is, in a sense, just another method we have developed to make ourselves feel good — not unlike sex, or drugs, or money. Amen to that.

More like this
Science
Jan. 28, 2023
How does the placebo effect take hold? A doctor explains two influential factors
By Kathryn T. Hall. and The Reader
Science
Jan. 29, 2023
Studying ancient human DNA has unlocked our origins — but the ethics are hazy
By Emiliano Rodríguez Mega and Knowable Magazine
Science
Jan. 29, 2023
Are coyotes dangerous to dogs and cats? Here’s how to keep your pets safe
By Tara Yarlagadda
LEARN SOMETHING NEW EVERY DAY.
Related Tags
Share: