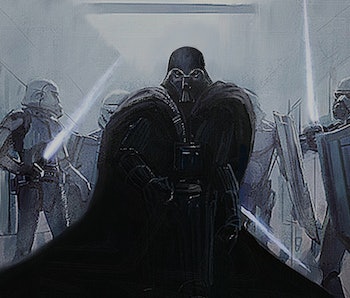 Though initially drawn in 2008, Cox’s art actually takes inspiration from the early 1970s. Back then, artist Ralph McQuarrie was hired by George Lucas to pre-visualize Star Wars with a series of concept paintings. Famous to fans, these paintings tend to depict Darth Vader’s helmet with a samurai influence, C-3PO with more feminine features reminiscent of the film 1927 film Metropolis, and of course, stormtroopers with lightsabers. The lightsaber-carrying stormtroopers were so popular that Kenner even released a limited edition action figure version of these characters in 2003.

And While McQuarrie’s painting had yet to incorporate the hallways of the Rebel Blockade Runner, the Tantive IV, the spirit of his lighstaber-toting stormtroopers (and their shields) lives on in Cox’s art.

Seen back-to-back, Cox’s art (above) and McQuarrie’s original (below) inhabit a weirder, more knightly version of Star Wars. Because if the stormtroopers have shields and laser swords, do we maybe want to start rooting for them? Or scarier: Would they actually be baddasses?

As it stands, it took until 2015 for anyone to see a stormtrooper with a lightsaber, and by that time, Finn had gotten rid of his armor. But there’s still time to give him a shield!