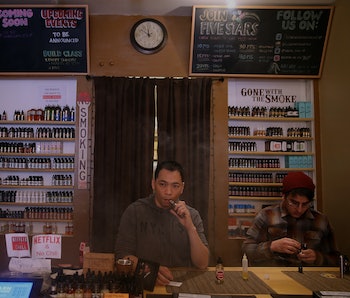 Nobody really knows what Donald Trump is going to do when he becomes president in January, but industry insiders believe that his policy decisions will fundamentally alter and forever change the somewhat peculiar culture of American vaping. And they’re pretty chill about it.

Most vaporizers and e-cigarettes, like many small electronic devices, are manufactured in China. President-elect Trump has already said he wants to onshore manufacturing jobs, competing with Shenzhen factories rather than relying on their steady output. He’s gone so far as to suggest that Americans boycott Apple products until the company divorces FoxConn and creates more domestic jobs. The potential pitfall, as many economists have suggested, is that this could cause a trade war with China. But, even if it does, the flow of cheaply made Chinese products into America is unlikely to stop. Scott Rasak, the Vice President of Sales and Marketing at Volcano Fine Electronic Cigarettes, says he isn’t concerned about getting the Chinese parts he needs to build his product stateside.

“It would be very weird for [Trump] to single out the vaping industry,” Rasak says of trade renegotiations. “Worst comes to worst, there are a handful of USA-made devices and hardware.”

Rasak’s somewhat cavalier attitude makes sense given that whatever turbulence Trump causes on the supply side for American vape manufacturers, he’s likely to make up for by opposing regulations on a different American-made product: “Juice.” The substance vapers inhale, juice is very actively regulated by the FDA, which recently cracked down on the sale of the liquid.

“We’re sorta hoping he’ll come in and alleviate some of the government regulations,” Rasak said.

In August, the FDA ruled that juice makers needed to submit Premarket Tobacco Applications for any juice they wanted to sell in the U.S. — which can cost between $117,00 and $466,000 per application to cover the FDA’s stringent testing.

“The FDA is more than welcome to monitor juice. It make sense to an extent, but considering the ingredients are, for the most part, only Vegetable Glycerin, Propolene Glycol, natural and artificial flavorings, and nicotine, it’s hard to accept the FDA should be involved in much of it,” says Cole Draper, an administrator of the Vape Nation Facebook community. Draper says the FDA regulations are frustrating, pointing to the United Kingdom’s embrace of vaping as a safer (but not completely safe) alternative to smoking. “When it comes to FDA regulations it’s really difficult to see why they think they have such power as to even regulate devices they don’t even attempt to understand.”

Draper said the vaping industry “has been self regulated from the beginning,” when owners refused to let minors in their shops and juice makers provided childproof bottles with “the needed information on them.” Under the new FDA regulations, Draper said the government has made it illegal for an owner to teach a new buyer how to use a high-powered device. Previously, vape shop owners were able to give free samples of juice and vape with customers in the shop.

“The best thing for the vaping community, the health of the United States citizens, is to keep the regulation of the vaping industry away from the FDA,” Draper says. “Form an agency out of the many pro-vaping advocacy agencies and have them under the surgeon general or another similarly informed person of position. Because the last few years has only really shown the FDA is behind tobacco … an industry it very very lightly regulates.”

If Trump both deregulates juice and stands toe to toe with China, the cloudy future of American vaping starts to look very different. Devices will cost more, but vapers with access to a wider variety of juice options, including homebrewed strains made illegal by the FDA’s August ruling, would likely pay for a better, if somewhat different, experience. Draper says he prefers American-made products already, due to the diversity of models. He suggests that the elimination of Chinese product from the market would create the conditions necessary for more serious (read: expensive) vaping to become popular. Connoisseurs would still search for the perfect pipe and the perfect juice and they’d pay a premium for buying American while getting, in return, a better experience.

Weirdly, anti-taxation activist Grover Norquist spent much of the presidential campaign trying to make vaping an issue, insisting that vapers made up a vibrant and motivated voting bloc. Trump, somewhat shockingly, never took the bait. But there is reason to believe that the president-elect would want to court that group. One in ten Americans use electronic cigarettes, and the core of many vape companies’ demographic are millennials. Slicing juice regulations would be the easiest way to do that and also the easiest way to convince an industry to get into the luxury business while the getting is good.

More like this
Mind and Body
Feb. 1, 2023
Why the future of periods could be none at all
By Elana Spivack
Science
Jan. 28, 2023
How does the placebo effect take hold? A doctor explains two influential factors
By Kathryn T. Hall. and The Reader
Mind and Body
17 hours ago
Why It’s Finally Time To Stop Obsessing Over Counting Steps For Health
By Claire Maldarelli
LEARN SOMETHING NEW EVERY DAY.
Related Tags
Share: