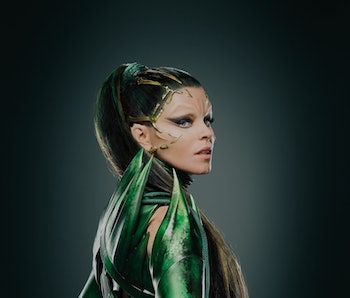 The core five Power Rangers have yet to debut in Lionsgate’s reboot film in March, but fans already have their attention on the iconic sixth member, the Green Ranger. Earlier this week, the Twitter for Power Rangers was “taken over” by Rita Repulsa (Elizabeth Banks), tweeting a high-res look at her weaponized wand that seems to contain the green Power Coin, the source of the Green Ranger powers. But does that mean Rita killed the Green Ranger, or is she a former emerald-hued Power Ranger herself?

Fans on Reddit and fan communities like RangerBoard are speculating how Rita has the green Power Coin. Some are positing Rita killed the original Green Ranger, a backstory hinted at with a line of dialogue in the trailer: “I’ve killed Rangers before,” she taunts Trini (Becky G). In Power Rangers mythology, it’s widely accepted that Zordon — the wise alien mentor of the Power Rangers — has had previous generations of teenagers fight evil for eons, and that the “original” six teens in Mighty Morphin Power Rangers were not the first at all.

Another theory is that Rita was the Green Ranger; her drastically different witch’s outfit from the TV show is form-fitting and armored, similar to the new costumes worn by the Power Rangers. Rita’s make-up also appear to have mechanical features, resembling something a helmet could latch on to. In the trailer, the Rangers morph with their suits and helmets organically growing over them.

Either theory would be a departure from the ‘90s TV series, Mighty Morphin’ Power Rangers. In Season 1, Rita possessed the green Power Coin and gave it to Tommy (Jason David Frank), a new kid at Angel Grove High, to become her Green Ranger. Eventually, the Power Rangers broke Tommy from Rita’s spell and recruited him to join their side.

Whether Tommy and his Green Ranger will be in the film or not, it’s clear that director Dean Israelite wants to overhaul key parts of the Power Rangers mythos for a new generation.

Power Rangers will be released March 24.