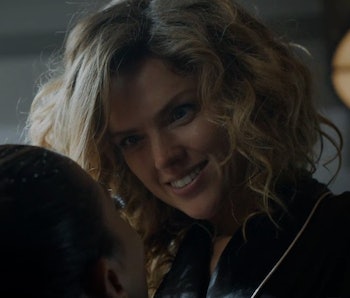 Barbara Kean is too level-headed to be Harley Quinn, right? Sure, she spends her time manipulating the powers that be in the seedy underbelly of Gotham City, but her plans are too solid to line up with Harley’s brand of unpremeditated chaos. But Babs’s behavior has sparked comparisons to the famed harlequin on recent episodes of Gotham.

Erin Richards, the actor behind Babs, told Cinema Blend: “There have been conversations. I think something major would have to happen to Barbara for her to fully become Harley Quinn. Because Harley Quinn is kind of…she doesn’t, to me, have the motivation that Babs has. Harley Quinn seems to like destruction for destruction’s sake, and that’s wonderful, but I feel like Barbara has more of a plan. She’s a little bit more intellectual in her approach toward climbing the ladder and taking over the underworld.”

All very true. But, keeping in mind this summer’s Suicide Squad blockbuster featuring Margot Robbie’s bubblegum pop version of Harley, a dramatic origin story isn’t out of the question. It’s Jared Leto’s Joker in Suicide Squad that drives Harley over the edge, and Gotham looks to be adding its own Joker very soon in the form of the recently revived Jerome Valeska.

Richards thinks that Babs had her “moment of madness and mayhem early on in Season 2 after the Ogre.” And, since her accident, Richards says that Barbara has a more “ruthless nature.”

“I think… there would have to be something that happened that sort of stripped away that kind of scheming side of her so that she would just become, I guess, unhinged in the world,” Richards said. “That, to me, is what Harley Quinn represents. That madness and mayhem that comes along with The Joker, because obviously they’re a team.”

The implications of an adult Harley and teenage Joker are not something anyone needs to think about. Harley and Joker have always had a distinctly romantic relationship despite the problems that often arise between them, but hopefully Gotham will take Jerome’s youth into account if Babs follows in his footsteps and gives into her “true nature.”

All of this is, of course, almost as good as someone outright saying that Babs is going to become Harley… eventually. It would be a smart move on the part of the writers due to the Quinn Renaissance as of late, and with the Joker’s recent revival, it’s only a matter of time.