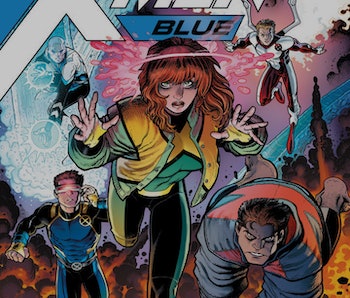 Once the dust settles from the great Inhumans vs. X-Men war, everyone’s favorite mutant team is coming back, only this time in two distinct flavors: Gold and Blue. IGN spoke with writers Marc Guggenheim and Cullen Bunn, who are penning X-Men: Gold and Blue, respectively, about the differences between the two teams, and the divide is interesting to say the least.

Marc Guggenheim, best known for his ongoing work on CW’s DC Arrowverse properties, will be writing X-Men: Gold for Marvel Comics. Focusing on a team that includes Storm, Old Man Logan, Nightcrawler, Colossus, Rachel Grey, and team leader Kitty Pryde — back from her adventures in space with the Guardians of the Galaxy — Gold is a forward-thinking book that puts Kitty Pryde’s belief in a bright future where the X-Men are beloved heroes in clear sight. The Gold team will face the Brotherhood of Evil Mutants in their first outing, testing whether or not the mutants will escape pariah status in the wake of the Inhuman war.

Cullen Bunn, who’s been having a banner year writing titles like Harrow County and Deadpool: Back in Black, will be tackling X-Men: Blue which stars the young X-Men trapped in the future: Beast, Iceman, Angel, Cyclops, and Jean Grey, who is finally in the leadership role. The book’s big twist is that these young mutants need a mentor to train them, so Blue team recruited none other than Magneto to replace the Professor X-sized hole in their hearts.

Since the teen X-Men were brought to the future, it’s easy to forget that they bring with them their original memories of being led directly by Professor X against Magneto. This conflict will come to a head when Jean assembles the Blue team herself in the hopes of forging an alternative X-Men team to tackle the world’s problems.

While the dynamic between the two teams is unclear, the Gold and Blue X-Men will share a headquarters and interact with one another across both books. However, the two teams will be tackling very different problems, with Gold attempting to establish a new X-Men legacy and Blue trying to figure out a way for these young X-Men to avoid the futures already set out by their future selves and figure out if there’s a way to help the timeline they left behind.

More like this
Entertainment
6.17.2022 11:00 AM
15 years ago, Marvel revealed its most ambitious crossover ever
By Richard Newby
Entertainment
6.15.2022 11:00 AM
15 years ago, Fox made the best Fantastic Four movie ever — it still stunk
By Jon O'Brien
Culture
6.13.2022 6:03 PM
Everything we learned about Spider-Man: Across the Spider-Verse at the Annecy Festival
By Robin Bea
Related Tags
Share: