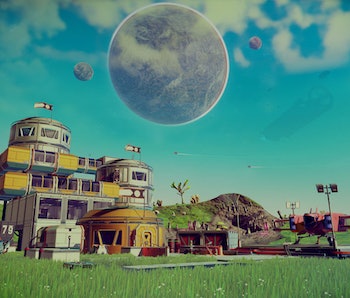 Endless possibility in an infinite universe sure is a “chill” experience in No Man’s Sky, but players drifted away after the gameplay proved too repetitive and mundane for those hoping to travel the stars fulfilling their wildest sci-fi desires; but Hello Games is hoping to build a foundation for new directions with its 1.1 update released November 27, aptly titled the Foundation Update.

Following No Man’s Sky’s release on August 9, many gamers were disappointed when expectations far outweighed what Hello Games could have ever hoped to deliver. But Foundation presents three game modes to entice players, essentially compartmentalizing the No Man’s Sky experience, appealing to three different types of gamers who found their desires only tangentially satisfied before. And this is the most we’ve heard from developers since a late-October Twitter account hacking fiasco.

Now, when booting up No Man’s Sky, you aren’t automatically loaded into your game save; instead, you are presented with these three new options:

In case you’ve forgotten, Sean Murray reminds us yet again that this is a very very very chill game. Your previous game save remains intact and unchanged. You vaguely wander the galaxy in search of technological upgrades and resources to make them happen, opting to either follow the curious compulsion of the Atlas or meander with the help of Nada and Polo. If that base experience fails to provide enough challenge or if it does not scratch your creative sandbox itch, now you’ve got options.

The new Survival mode starts you out in much the same way the base game does: You’re on a randomly generated planet in the galaxy with a broken down ship and no explanation of how you got there. Rather than pleasantly beginning next to your broken ship, you’re around a 10-minute walk away from it with nothing but a sharp sense of fear at the hazardous weather conditions you’re experiencing (Note: NONE of your upgrades, gear, resources, or language knowledge carry over from the base game into the other game modes, and there is no way to transfer the save or anything like that. You’re starting over completely). Thankfully, there will be a small building nearby to provide some kind of shelter.

Enemies don’t really seem to attack on sight, but they’re promised to be more plentiful (true) and more aggressive (maybe?). Not only are resources overall much more limited, but your mining laser seems to be much less effective as well, making the whole process of finding enough materials to survive a source of difficulty. Your shields and life support are also weaker, making a combined effect that can and will kill you quickly. You can’t even survive making a run for your ship without running out of the resources needed to replenish your suit and dying of exposure.

What Survival amounts to is a “Hard” mode of sorts for the base game, no doubt geared towards those who thirst for a more action-oriented experience as opposed to the almost-too-easy feel of the regular game. You’re strapped for resources in a galaxy that threatens your life at every turn, and scrapping together enough parts just to make it off the first planet will be a game in itself.

This mode promises to indulge your “creativity and construction skills” and boy does it deliver. There are no building costs and you have unlimited health. When you spawn, you already have your fully repaired ship and a home base ripe for the taking. Nothing carries over from the base game, so you still need to discover things like Exosuit slots and new technologies, but resources are just not necessary … to do anything. The “cost” will still appear in the menu and you still need to manually refuel your ship, multi-tool, and suit, but you start out with zero Units and nowhere to go but up.

This is the mode for anyone previously frustrated by resource scarcity or clumsy inventory management, those that were enticed by the sandbox promise of No Man’s Sky but angry when they found an impersonal experience that didn’t allow them any creative freedom about how to play the game.

You quickly get a series of tasks to get you started in building your base. You have to “Claim” a “Home Planet” before you can begin and then can do so in a pretty intuitive way. Hitting up on the D pad activates Build Mode, and you can tell they are channeling Fallout 4 building in this.

This mode streamlines so much of the experience so as to remove any and all tedium, thus freeing you to build and expand your galactic empire to your heart’s content. Any base has the option to instantly access your “Previous Base Item Cache” should you choose to build a new one. You also get a Base Terminus, which allows you to travel between your owned Base and the nearby Space Stations instantaneously. This feature is for anyone who grew weary of the having to go back and forth between planet and space station to sell resources and browse new ship options. You know, because the experience of breaking atmosphere and dodging asteroids can somehow get old.

Whereas before, a Space Station would be scarce on actual inhabitants — with a number of traders docking in and out with random frequency — now, a first visit into the side room of a Station will surprise with a handful of different species sitting around a table.

One of the most interesting new features of this Creative mode is that you can recruit aliens to work for you. Recruiting a Builder is as easy as speaking to a frog person and enslaving them at the nearest Space Station mere minutes after starting the game mode.

This means that you spend the bulk of your time wandering across your home planet finding and installing upgrades that allow you to expand an ever-growing empire. You can cultivate interior plant farms in your base and nurture different specialists that work for you. But most interestingly, you can eventually purchase huge interstellar Freighters (also customizable!) to stockpile huge amounts of resources for trading … between star systems!

There are also a great deal of miscellaneous updates to the user interface and visuals. For a detailed list of all the changes includes in the update, take a read through the Patch Notes or watch the overview trailer below:

Before, No Mans Sky’s greatest challenge was in its tedium; its infinitely procedural generation offered some actual variation to its planets in what ultimately felt like an unvaried experience. You mine or trade for resources to make the necessary upgrades that allow you to find more upgrades — for your suit, for your ship, for your multi-tool — all in the pursuit of finding the center of the galaxy. The process of finding these things never really presented a threat or even a challenge and other then gradual expansion of your inventory and the selection of multi-tools and ships — both of which were ultimately just dictated by inventory space anyway — there was no opportunity for customization whatsoever. The only real threat was for those with slow and/or unprepared ships who found themselves beset by a small group of space pirates every once in awhile.

Now, the threat of space travel feels very real in survival mode, and those who wanted to stake their claim on an alien planet to build an interstellar financial empire can do so with ease.