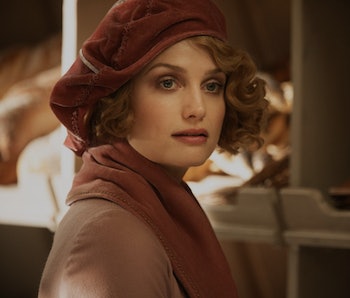 Fantastic Beasts And Where To Find Them revealed several types of magic that is mostly new to Potter fans, like the sinister [Obscurus] (https://www.inverse.com/article/24045-ezra-miller-obscurus-fantastic-beasts) and the Death Potion. Because the Obscurus blew up half of New York, it is the flashiest and most obvious instance — but the film also had a quieter callback to Potter lore that will undoubtedly come up again: magical psychics. Fantastic Beasts reveals two distinct varieties, in the form of Queenie’s apparent mind-reading and Grindelwald’s visions.

In Order of The Phoenix, when Harry learns that Voldemort can manipulate his thoughts, he must take lessons with Snape. Obviously Snape’s explanation for how it works is sassy as hell and filled with shade: “Only Muggles talk of ‘mind-reading,’” he says. “The mind is not a book, to be opened at will and examined at leisure. Thoughts are not etched on the inside of skulls, to be perused by any invader. The mind is a complex and many-layered thing, Potter … or at least, most minds are …”

If Snape’s tutorial is too harsh for you, don’t fear. Here’s a refresher on the types of magical psychics and what Queenie and Grindelwald’s skills mean for the future of the franchise.

When we first meet Queenie Goldstein, she is able to pick up what the no-maj Jacob is thinking about as he looks at her. This means that she is exceptionally skilled at Legilimency, the process of diving into someone’s mind. In the Potter books, we see Dumbledore, Snape, and Voldemort use this skill. Harry tries to learn Occlumency — the practice of shielding your against such an invasion mind — but thanks to Snape’s aforementioned shade, it doesn’t go well.

According to Alison Sudol, who plays Queenie, Legilimency comes naturally to her. “She’s basically a complete and utter magical empath,” Sudol said. “She’s able to read people, so it’s not just reading somebody’s thoughts. Shes can read into someones story, she can see people’s goals.”

Percival Graves — who is later revealed to be the Dark wizard Gellert Grindelwald — is a Seer. We know this because when he meets with Credence Barebone, he talks about seeing a child in a vision. Of course, as we later learn, he misinterprets his vision and misses the fact that Credence himself is the “child.” But the Potter world has a precedence for misguided psychics.

Before Harry’s birth, Professor Trelawney has a vision that enables her to make the initial prediction about The Boy Who Lived (“the one with the power to vanquish the Dark Lord approaches, born as the seventh month dies…”). Later, in Prisoner of Azkaban, she correctly predicts Voldemort’s second rise. Because Trelawney’s skills were not always the most reliable, Dumbledore says, ‘Who’d have thought it? That brings her total of real predictions up to two. I should offer her a pay rise.’

Although he says it as a joke, her predictions are vitally important — as is the role of Legilimency. Both strands of magical “psychic” skills are vital to the plot of Fantastic Beasts, whether it was Graves accidentally predicting Credence’s true nature or Queenie overhearing that Newt and her sister were about to be sentenced to death. When J.K. Rowling throws magical psychics into her stories, it’s never as merely a throwaway. Expect these skills to come into play in the next four movies.

Reading minds and predicting the future are imperfect skills in the Wizarding World, but keep your eyes on these instances. Just because the characters are slow to interpret the future, it doesn’t mean the audience has to be.

More like this
Entertainment
8.4.2022 4:14 PM
53 sci-fi and DC shows and movies on HBO Max you need to watch ASAP
By Jake Kleinman, Eric Francisco and Ryan Britt
Entertainment
4 hours ago
Why the Andor trailer could be setting up a Darth Vader fight scene
By Dais Johnston
Entertainment
5 hours ago
Rings of Power's biggest canon change could ruin one major Tolkien story
By Alex Welch
Share: