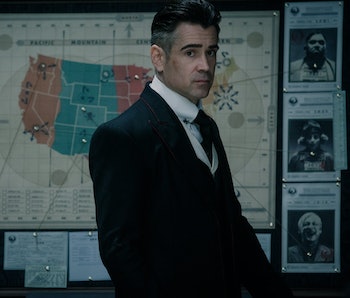 For all the warmth and fun of the Harry Potter novels, they never shied away from exploring the more horrifying implications of the magical world. For every carefree Quidditch scene, there’s a bad gravity-induced injury. The ultimate punchline of the Weasely twins’ jokes is Fred’s tragic death. When the vainglorious fraud Gilderoy Lockhart gets his memory erased in Chamber of Secrets, it’s a moment of triumph, but three books later, Harry, Ron, and Hermione have an unsettling hospital encounter with a now vacant-minded Lockhart. But above all, the most disturbing aspect of the Potter books was always the wizarding world’s justice system. And now that Fantastic Beasts and Where to Find Them has provided a glimpse of the American system, it’s settled: The justice system in the wizarding world is just as horrifying as the worst justice systems in the real world.

Halfway through the Potter spin-off movie, which opened in theaters over the weekend, Newt Scamander and Tina Goldstein are sentenced to death without a trial, and without even being accused of any particularly grievous crimes. Granted, the Auror who gives the order turns out to be the dark wizard Grindelwald in disguise, but government employees obey his command without protest, which implies that this is not out of the ordinary. Even earlier in the movie, Newt and his companions are thrown directly into prison cells before they have a chance to plead their case to the Magical Congress of the United States of America.

This is a marked departure from the Ministry of Magic in 1990s Britain, which was still hardly a beacon of justice. In Order of the Phoenix, when Harry stands trial for expulsion from Hogwarts, the Wizengamot (wizard jury) is clearly resolved to presume his guilt. Nevertheless, he’s still afforded an opportunity to share his side.

But Grave’s exercise of power in Beasts is far more similar to the Marauders’s generation of 1970s wizarding Britain, and his methods are similar to the infamous Barty Crouch Senior. As Sirius tells Harry in Goblet of Fire, “[Crouch] was the one who gave the order for me to be sent to Azkaban without a trial. And I wasn’t the only one who was handed straight to the Dementors … Crouch fought violence with violence, and authorized the use of the Unforgivable Curses against suspects.”

Curiously, the main difference between the two justice systems are their approaches to capital punishment. They’re equally “holy shit” moments, albeit in different ways. The British version of the death penalty does not technically kill — a Dementor merely sucks your soul out. As Lupin explains in Prisoner of Azkaban, “You can exist without your soul, you know, as long as your brain and heart are still working. But you’ll have no sense of self anymore, no memory, no … anything.”

By contrast, the American wizard version of capital punishment does kill, but the process is more pleasant. Your memories swirl across the surface of a lethal concoction, brainwashing you into stepping willingly inside. While the Fantastic Beasts approach is less terrible in theory, the way the scene is filmed with a sterile white room and smiling government employees making it more insidiously disturbing. It’s One Flew Over the Cuckoos Nest where the Dementors hews more towards Halloween.

The Potter stories have always been concerned with the dubious ethics of power, and the way it corrupts and is abused. Fantastic Beasts brings this closer to the surface than ever. Azkaban always had Alcatraz parallels, but now we see echoes of the Red Scare and even Guantanamo Bay. The future of Fantastic Beasts is likely to get even darker, as the series will conclude in the heart of World War II. As the second movie will take place in Paris, we can only assume someone will be sentenced to hang in a magical noose.

The Harry Potter world remains a place that beckons fans, but if you solemnly swear that you are up to no good, for Merlin’s sake, don’t get caught.