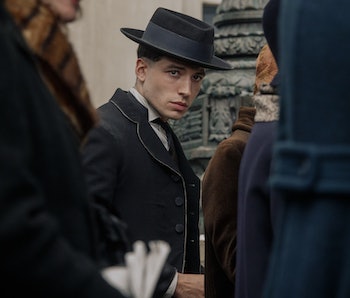 Towards the end of Fantastic Beasts and Where to Find Them, we see a type of magic that’s new to even diehard fans of the Potter universe. Previously, we’ve seen wizards Apparate and travel via Floo Network. We’ve seen them fly using a variety of objects or creatures — broomsticks, Thestrals, Hippogriffs — but we’ve never seen anyone turn into a scary dark cloud, at least not to the destructive extent we see in Beasts. Is this a new variety of magic that J.K. Rowling pulled out of her ass in order to give the film a flashy finale? Not quite.

Although Fantastic Beasts is the first time we’ve had a name for uncontrollable repressed child magic — Obscurus — and seen it in action, it’s not the first time we’ve encountered the subject. In Harry Potter and the Deathly Hallows, Dumbledore’s sister’s story is strikingly similar to Ezra Miller’s Credence Barebone. After suffering a brutal attack from Muggle boys, Ariana Dumbledore repressed her magic, but it burst forth in unexpected and violent ways. As Aberforth Dumbledore explains to Harry,

Although Aberforth’s story contains no references to scary dark clouds, the parallels are implicit. Ezra Miller’s Credence was not attacked in the same way as Ariana Dumbledore, but he’s had his own reason to suppress his magic. The Wizarding world in 1926 New York is strictly segregated from the Muggle world, as anti-Wizard hate groups hand out leaflets on street corners. To make matters worse, his adopted mother is a cross between the Dursleys and Umbridge — she is the head fanatic helming the hate group who neglects and beats him. He’s not exactly in an environment where he’s encouraged to embrace his true nature.

And who wouldn’t suffer extreme emotional distress after being forced to walk around with this haircut?

Like Ariana Dumbledore then, Credence is an Obscurial, the host of an Obscurus. They’re rare enough that — spoiler alert — Colin Farrell’s Percival Graves, who is revealed to be the dark wizard Gellert Grindelwald, is intrigued by them. Newt Scamander maintains that an Obscurus cannot survive long without its host. But intriguingly, director David Yates gave a hint that this might not be a two-way street. Originally, a cut scene implied that Credence is alive and well and heading to Europe, where the next film will be set.

It’s safe to say this ominous dark cloud has not disappeared on the wind. Potter fans, bookmark this concept and keep constant vigilance.