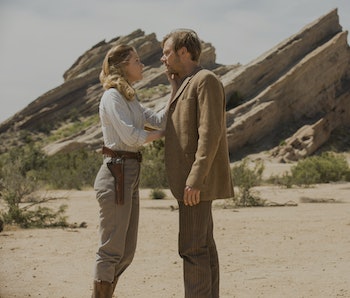 As Westworld ambles into its final stretch, circling more big revelations, its mysteries keep piling on. “Trace Decay,” its eight episode, dives deeper into Ford’s sinister machinations, Maeve’s power-grab, and Dolores’s struggle with her own identity. It also gives us a glimpse into the Man in Black’s story and brings back a surprising character at an inconvenient moment: Logan. As always, part of the show’s charm is its compelling mixture of Old West period tropes, sleek sci-fi aesthetic, and corporate espionage. Although that exact combination is rare to find in one story, here are some novel that capture aspects of its tone.

1. The Gunslinger by Stephen King

If you don’t live under a rock, you’re probably aware that Stephen King’s Dark Tower series will soon be a film starring Idris Elba and Matthew McConaughey. But if you have yet to crack the spine on this daunting Song of Ice and Fire-length series, it’s never been a better time to start with the first. This story has its own Man in Black, a healthy dose of Old West aesthetic, and a character on a relentless pursuit of a lofty-sounding place. Only, here it’s a Dark Tower instead of a mysterious maze. If you’re most interested in Teddy and the Man in Black, this is the book for you.

2. Parable of the Sower by Octavia Butler

In “Trace Decay,” Bernard and Ford get philosophical about the nature of being. Bernard asks, “What’s the difference between my pain and yours? Between you and me?” Similarly, sci-fi master Butler heaps heavy doses of philosophy onto her sci-fi. Parable of the Sower expands upon Ford’s ideas of grandeur and godliness and revolves around the development of a new religion in a dystopian society.

3. The Secret Sharer by Joseph Conrad

Dolores has always struggled with her identity and desire to be free, but she takes it to the next level in the eighth episode. “Are you real?” she asks William. “I can’t tell anymore. It’s like I’m trapped in a dream or a memory from a life long ago.” Although Conrad’s The Secret Sharer is a classic novella, it revolves around a similar theme of identity politics. Both the protagonist and the reader doubt the nature of the reality Conrad spins with his dreamlike prose. Read the full story here.

Silver Eyes is the sequel to Violet Eyes and can’t be read as a standalone. Nevertheless, it contains a protagonist who begins to doubt her surroundings and her own memory — just like Maeve. Although it contains no Wild West, its future aesthetic, corporate setting, and atmosphere of mistrust is also reminiscent of the Delos scenes in Westworld.

5. The Book of the Damned by Tanith Lee

Although The Book of the Damned is fantasy, it shares much in common with Westworld. It has a similar androgynous approach to identity, and it’s set in an alternate version of Paris, just as Westworld is an alternate version of the Old West that never truly existed. As a master of dark fantasy, you can also expect Tanith Lee to conjure an enticingly eerie atmosphere.