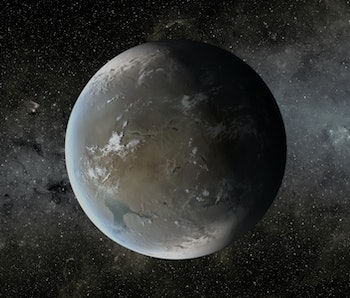 While working on his Ph.D., Alejandro Suárez Mascareño of the Instituto de Astrofísica de Canarias (IAC) and the University of La Laguna (ULL) discovered a planet that is believed to be 5.4 times more massive than the Earth. The planet — dubbed GJ 536-b — orbits a very bright, red dwarf star, much like our closest neighbor Proxima Centauri.

Located approximately 32.7 light-years from Earth, the planet unfortunately orbits outside of its host star’s habitable zone. So, while the planet is not a potentially habitable world, it could allow for some interesting research opportunities. For instance, it has a short orbital period — completing one rotation every 8.7 days — and is very close (astronomically speaking) to Earth, which means scientists may be able to get a glimpse at its atmosphere.

Using the HARPS (High Accuracy Radial velocity Planet Seeker) spectrograph on the 3.6M Telescope at ESO’s La Silla Observatory in Chile, and HARPS North, on the Telescopio Nacional Galileo (TNG) at the Roque de los Muchachos Observatory, Garafia (La Palma), Mascareño discovered the exoplanet under the supervision of his thesis directors Rafael Rebolo and Jonay Isaí González Hernández (also of the IAC). Their findings have been accepted for publication in the journal Astronomy & Astrophysics, with a pre-print available now.

The team used radial velocity measurements from the star combined with spectroscopic observations collected over an eight-year period, to detect the planet’s presence. Not only did they discover a new exoplanet, but they also learned a great deal about its host star, which has a 44-day rotational period, and a magnetic cycle similar to our Sun’s, but much shorter (just under three years).

“So far the only planet we have found is GJ 536-b, but we are continuing to monitor the star to see if we can find other companions,” Mascareño explained in a news release. “Rocky planets are usually found in groups, especially around red dwarf stars. We are pretty sure that we can find other low-mass planets (including other “Super Earths”, which range from 1-15 times the mass of the Earth) orbiting further from the star, with periods ranging from 100 days up to a few years.”

Mascareño says the team’s next steps will be to observe the star, looking for transits as potential planets pass in front of the star. Data collected from these events will help narrow down the newly found planet’s density and radius.

It’s important to note that while scientists can predict which planets might be habitable, it doesn’t mean that we are guaranteed to find actual life. Until more advanced telescopes — like the James Webb Space Telescope or WFIRST — we may never know which worlds feature the proper conditions to support life.