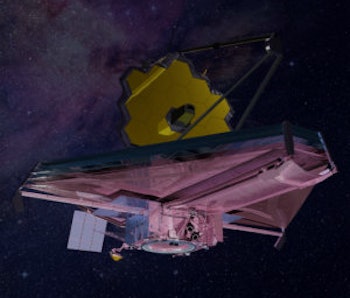 Proxima b might have an atmosphere capable of supporting water, but researchers won’t know until the most sophisticated telescope ever built gets launched into space in 2018.

Proxima Centauri b, the planet that recently became internet-famous for its potential to host extraterrestrial life, is now the subject of much research and speculation about exactly what conditions the planet would need to present with in order for that potential to be a reality. Two researchers are planning to use the brand new James Webb Space Telescope (JWST) to test one of the major criteria — whether Proxima b has an atmosphere capable of supporting surface liquid water.

In a paper uploaded to the arXiv repository, Laura Kreidberg and Abraham Loeb of the Harvard-Smithsonian Center for Astrophysics argue the JWST is the instrument with the “potential to put the first constraints on the possibility of life around the nearest star to the Solar System.” The simulations the pair ran indicate that the telescope will be able to reliably distinguish a planet with bare rock from one with the kind of night-time heat redistribution we’re looking for.

The JWST hasn’t actually been deployed yet — it’s scheduled for launch in 2018. We’ll need to wait until it’s been taken into space before we’ll know its capacity here for sure. But it’s the right size (six and a half meters in diameter) and sufficiently advanced to tell us at what angle Proxima b lies relative to its parent star, and the level of infra-red radiation it puts out. The researchers posted a five-sigma confidence level that the JWST would be able to confirm whether or not the planet has an atmosphere, which is science-speak for, like, really confident.

We just have to wait a little longer to know for sure. When October 2018 rolls around, the JWST will be “the premier observatory of the next decade,” according to NASA, with thousands of scientists around the world using it to study the origins of life in the universe. The instrument itself was created through a collaboration between NASA, the European Space Agency, and the Canadian Space Agency.