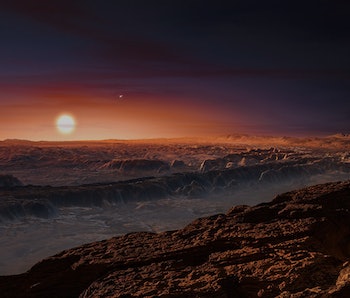 Proxima b is the closest exoplanet to Earth, and a world that could potentially sustain life. But what it looks like remains largely a mystery. Now, researchers have extrapolated the most-likely core compositions of the planet, putting us one step closer to determining its potential to support life.

ICYMI, which would have been difficult since the internet lost its collective mind at the news, Proxima b jumped to the forefront of the discussion about potentially habitable planets when its discovery was announced in August. Proxima b exists within parent star Proxima Centauri’s “Goldilocks Zone,” meaning it’s the proper distance to feature an atmosphere capable of supporting life. We’ve found exoplanets before, but Proxima b, as you might guess from the name, is close — just 4.25 light years.

The planet could be a candidate for future human colonization

The major implications are twofold: if there is indeed life on Proxima b, we could one day interact with it, and the planet could be a candidate for future human colonization.

We’re not yet able to determine the planet’s diameter, which means we can’t yet calculate its density. The findings, presented on October 17 at the annual meeting of the American Astronomical Society Division for Planetary Sciences in Pasadena, California, and accepted for publication in The Astrophysical Journal Letters, illustrate attempts by Astrophysics Laboratory of Marseille astrophysicist Bastien Brugger, and his colleagues, to extrapolate a likely range for Proxima b’s radius.

At the lower end, Proxima b might be small (relative to Earth) and dry, like Mercury, with a rocky, metal core composed mostly of iron, and a significant amount of silicate in the mantle. At the upper value, Proxima b might be substantially larger than Earth and mostly a big ocean, which would mean a layer of high-pressure ice covering the mantle, which would also have a higher percentage of silicate.

They acknowledged that the range was wide, but it’s still useful for determining a number of factors, including the all-important water composition on the planet’s surface. Four different formation theories have been put forth for Proxima b, and only in one of them is the planet completely dry; the other three predict significant amounts of water.

The more precise information we can gather about water on Proxima b, the closer we come to determining its capacity to sustain life. Figuring out where along the proposed range of radii the planet truly lies, is a matter of continuing to make additional observations. Brugger told Popular Science that the Breakthrough Starshot project might mean we could have those answers within the next couple of decades.