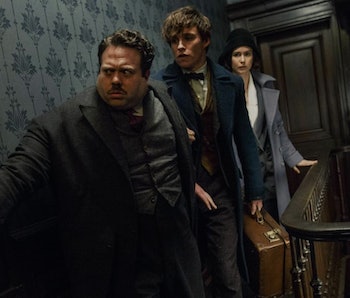 While there’s plenty of focus surrounding Newt Scamander and his beasts in Fantastic Beasts and Where to Find Them, there is little concern to be found amongst wizards about the individual creatures themselves. That doesn’t mean they don’t deserve respect, and Newt’s looking to change that.

Newt has so much love for his creatures, from the noble Thunderbird to the innocent Bowtruckle. However, it’s easy to miss the names of the beasts while Newt, Tina, and Kowalski are ducking around New York City trying to find them all.

So, below is a list of the 10 beasts featured most prominently in Fantastic Beasts and Where to Find Them. While some are left off — like the enormous dung beetle-type creatures running around in Newt’s suitcase — all of them are equally important to Newt’s work and, therefore, the film itself.

Pickett featured above has abandonment issues and, thus, rides around in Newt’s breast pocket for most of the film. Similar in appearance to a stick bug, Bowtruckles are small, agile, peaceful, painfully shy bug-eaters. And just look how cute they are!

Similar to a small, ghostly primate with soulful eyes, the primarily peaceful Demiguise can become invisible at will and has precognitive abilities. So, sorry to say it, but the only way to catch one is to be truly unpredictable. Watch out for that bite, though, which can turn nasty if the Demiguise is provoked.

Featured as the lady in waiting of Newt’s beasts is the Erumpent. Erumpents are native to Africa and, despite their enormous size and glowing horns filled with explosive fluid, they are largely peaceful creatures. The Erumpent’s thick hide repels most spells and charms.

Newt’s Erumpent is in season during Fantastic Beasts, and runs through central park looking for a mate. It’s only with the help of a complicated mating dance that Newt is able to recapture the Erumpent.

Newt is in possession of the only breeding pair of Graphorns left in the world and their two babies. Large and carnivorous, Graphorns walk on four-thumbed feet, have grayish-purple hides tougher than dragon scales, and can repel most spells.

Like the other creatures in Newt’s care, the Graphorns are incredibly trusting of him. Typically, the creatures are aggressive and not easily tamed, but perhaps Newt’s Graphorns are aware of the debt they owe him for saving their lives.

Mooncalves, as common as they are throughout the world, are mysterious little creatures. Incredibly timid, Mooncalves only emerge from their underground burrows during the full moon.

With their smooth, pale gray skin and enormous reflective eyes, the mooncalves totter around on four spindly legs and creature intricate geometric patterns in wheat fields. While the patterns left behind confound muggles and No-Majs, wizards know them to be the result of complicated dances by the mooncalves, which are thought to be part of a mating ritual.

When Newt’s new Muggle friend, Kowalski, is bitten by an angry Murtlap, he breaks out in a sweat and goes a bit wonky. Only a quick treatment from Newt makes the sweating clear up in time for Kowalski to join in on the adventures ahead.

Murtlaps look a lot like naked mole rats with anemones growing out of their backs. They’re typically found on the coasts of Britain where they feast on crustaceans, but they aren’t exactly picky about what they put in their mouths. Hence, the chunk taken out of Kowalski’s neck.

The Niffler is just so damn cute. Similar to a cross between a mole and a duck-billed platypus, the Niffler, while cute, is nothing but trouble.

Remarkably fast and agile, Nifflers are always on the hunt for shiny objects: money, jewelry, etc. Newt’s Niffler is a giant headache for him throughout the film. Nifflers store their stolen goods in their seemingly endlessly expandable stomach pouch and, therefore, don’t make good pets.

The Occamy is choranaptyxic, which means it will grow or shrink to fit the space it’s in, whether that space be a teapot or an enormous attic. Newt has several, newly hatched Occamies on his hands, all blue-green in color and looking like a cross between a dragon and a bird.

Occamies hatch from eggs made of pure silver, making the eggs extremely valuable and the occamies themselves very defensive from a young age. They’re used to being hunted.

Perhaps the most curious of Newt’s fantastic beasts is the Swooping Evil. When the Swooping Evil is calm and at rest it curls into a prickly cocoon on a string — otherwise, its name is profusely fitting.

When the Swooping Evil spreads its wings, it looks like a cross between a spiny reptile and a brilliantly colored butterfly. It has a habit of sucking people’s brains out, but its venom can be useful for erasing bad memories when properly diluted.

Last but not least is the Thunderbird. An enormous, multi-tailed, multi-winged, gold-and-white eagle, the Thunderbird is the namesake of a house at the American Ilvermorny School of Witchcraft and Wizardry.

Native to “the wilds of Arizona,” the Thunderbird can create enormous storm systems when it flaps its wings, and has the uncanny ability to sense lurking danger. Newt rescued his Thunderbird, Frank, from a trafficker in Egypt and has traveled to the United States to return him to his rightful home.