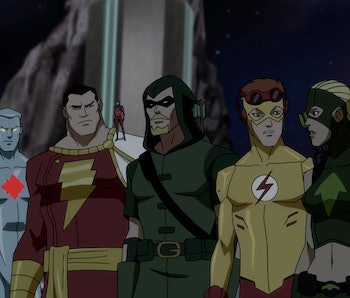 The battle to renew Young Justice has been won. The cancelled but beloved DC Comics series from Brandon Vietti and Greg Weisman will return for a third season, presumably picking up where Season 2 — titled “Invasion” — left off more than three years ago. Weisman himself said the show will never complete its story. But after three years, there are some pressing questions Young Justice should answer, if only for all of our sanity.

In the final battle, Wally West, aka Kid Flash, sacrificed himself when his slower super-speed compared to Barry Allen and Impulse made his body an “exit valve” for the ready-to-explode chrysalis energy of the Black Beetle’s Magnetic Field Disruptor. Knowing it’s too late, Wally absorbs all the energy, and just as he tells his uncle to tell Artemis he loves her, he dies.

The Justice League are cleared of their crimes while the Green Lantern Corps escort the Reach to answer for their own. Lex Luthor, for his contributions to helping humanity during the invasion, is promoted to U.S. Secretary General, to Superman’s disgust. Captain Atom hands over his temporary chairmanship of the League to Black Canary, while Batgirl replaces Nightwing on the core Young Justice team which welcomes Virgil, aka Static, as a new member. Bart takes over for Wally West as the new Kid Flash, while Artemis keeps her Tigress disguise because “Artemis” holds too many memories of Wally for her.

After a year of deep undercover work planned by Nightwing, Aqualad assumes supreme position of the team and divides the team into three squads — Alpha, Beta, and Gamma — to pursue new missions:

Team Alpha: The alien-based members of the team Superboy, Miss Martian, and Beast Boy were sent to aid the Green Beetle — also a Green Martian — to help rebuild Mars.

Team Beta: The Earth-based members Tigress, Kid Flash (Bart Allen), Bumblebee, and Guardian will stop LexCorp. During the Reach’s invasion of Earth, LexCorp marketed a Reach soft drink containing alien chemicals to subdue humans over generations. Even after the Reach have been kicked out, the drink is still being marketed under a new name, and the League needs to find proof.

Team Gamma: Lead by Batgirl, everyone else — including Blue Beetle, Static, Robin, and Wonder Girl — will pursue Vandal Savage, who is still at large even after his ties with the Light and the Reach were cut. It was his doing that caused the League to commit crimes on Rimbor, and when the Justice League were cleared, Vandal had a mysterious message declaring Earth off-limits to all invaders. Strange.

In a move that surprised nobody, Tim Curry’s fear-mongering cable news personality G. Gordon Godfrey is in cahoots with Desaad, Vandal Savage, and the biggest baddie of them all: Darkseid. Gasp!

All the Questions We Have

3) How many years will pass? Between Season 1 and Season 2, there was a drastic five-year jump, meaning the “Young Justice” had in fact grown up a little into the show’s second season. This explains how Dick Grayson went from Robin to Nightwing in one season. Given the small track record, could Season 3 follow the same pattern and jump another five or more years?

2) Could Wally come back? Death in comic books is never a definite thing. If Superman and Batman could come back to life, so can Wally West, who in the comics grew up to become THE Flash after Barry Allen died. It’s curious if the series would keep death permanent or find some way to bring back the man formerly known as Kid Flash. Hey, it worked in Arrow.

1) What’s Darkseid planning? Another invasion? Supreme dominance? Cookies? Darkseid is the number one shot-caller for the bad guys in the DC Universe and his introduction in Young Justice can only be set-up for something huge. No wonder Young Justice fans were furious when the show was canceled. What are Darkseid’s plans? How will he pursue them? What could Godfrey do? These are easily the biggest questions for Season 3.

Young Justice will return for a third season, but dates remain unannounced.