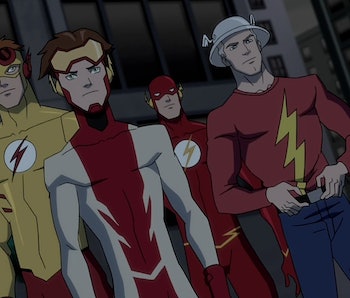 DC’s beloved animated series Young Justice is definitely coming back for a third season after being canceled, but it might not be the final chapter in the youthful superhero team’s story. Details involving the plot have yet to be revealed, but executive producer Greg Weisman tells Inverse that no season of Young Justice will ever wrap up the story.

“The fact of the matter is, if they’re one of my shows, they’re never going to get 100 percent closure,” Weisman told Inverse back in April, when the show’s second season was added to Netflix. “People have written me on my website, on Twitter, on Facebook, saying, ‘We got to get you a third season so you can end it. I’m like, ‘I’m never going to end it. Never.’”

At the end of Season 2, the alien invaders known as the Reach were defeated while Lex Luthor rose to the U.S. Presidency. As for the team, Wally West (aka Kid Flash) was killed, Nightwing stepped down from leadership and was replaced by Batgirl, and Static also joined as a member. While the fight against Reach was finished, supervillains Vandal Savage and Darkseid formed an alliance, setting up what would be an even bigger arc in the next season. That’s when Young Justice was canceled, due to Mattel pulling financial support due to low toy sales.

While fans can probably expect the fight against Vandal Savage and Darkseid to continue in Season 3, Weisman says that no season of Young Justice will ever finish the team’s story, because a superhero’s duty never finishes. “We’d give closure to that season but we would not end it, because life goes on. Particularly if you’re talking about a team show or a universe like Young Justice or Gargoyles. Unless you’re destroying the entire universe at the end of your series, which might be a bit of a downer, life goes on. There is no end.”

The premiere of Young Justice Season 3 has yet to be announced.