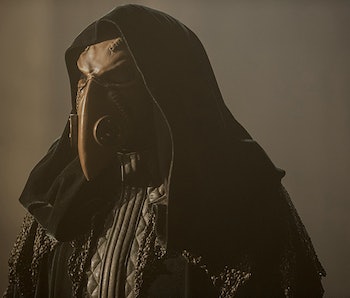 Yet another monster speedster has entered The Flash, but this time, he’s not alone. At the end of this week’s episode “Shade,” Doctor Alchemy (Tobin Bell of Saw) revealed he’s in cahoots with Savitar, the God of Speed, who kind of looks like the evil spawn of Zoom and Megatron from Transformers. Together, they’ve been restoring people’s powers from the Flashpoint timeline.

Little is known about Savitar in the DC TV universe, but perhaps his comic book origin — namely the fact he’s a cult demigod — can offer a insight into his relationship with Alchemy. Created by Mark Waid and Oscar Jimenez during their acclaimed run on The Flash in the ‘90s, Savitar was an unnamed Eastern European pilot selected to test an experimental supersonic jet. Struck by lightning during flight, the plane crashed but the pilot survived, and he gained access to the Speed Force as a result.

Naming himself “Savitar” after the Hindu god of motion, Savitar sought to learn the Speed Force and became a cult leader in the process. In comics, Savitar first fought Johnny Quick, a Golden Age superhero who is the father of Jesse Quick (played by Violett Beane in the series). Savitar then fights Wally West, who teams up with every speedster alive including Impulse, Jay Garrick, XS, and Max Mercury to take him down. Around this time, Savitar also recruits a woman named Christina Alexandrova, a member of the Blue Trinity — a prototype team for the Russian team Red Trinity — to become Lady Savitar.

In Geoff Johns’s 2009 series The Flash: Rebirth, Savitar returns only to die when he’s touched by the resurrected Barry Allen, who is now fatal to every speedster he comes into contact with thanks to a plot conceived by the Reverse-Flash.

Looking vastly different on TV — in the comics he looks like the Undertaker at a rave — it’s reasonable to believe he’ll have a different motive and, hopefully, a different fate. But all signs point to Alchemy and his hooded druids as worshippers of Savitar, who declared himself “the God of Speed” when he attacked Barry Allen (Grant Gustin) in his shocking debut.

This season of The Flash is taking quite a bit from Mark Waid’s time on Flash comics. Although Alchemy was created by John Broome and Carmine Infantino in 1958, the character had a brief role in Waid’s run when Dr. Curtis Engstrom — a S.T.A.R. Labs scientist who studied Doctor Alchemy’s weapon, the Philosopher’s Stone — went mad and became the second Doctor Alchemy. (What a coincidence that The Flash has Draco Malfoy this season.) Waid’s version of Alchemy didn’t have any interactions with Savitar, which means the TV show is exploring some new territory with these characters.

The Flash airs Tuesdays on the CW.