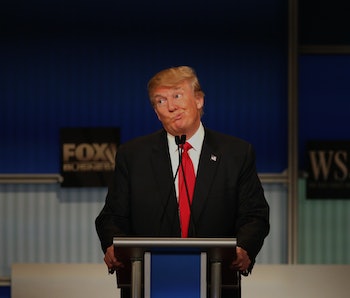 Fake news is a huge problem on Facebook, despite what Mark Zuckerberg says — so much so that it might have even helped Donald Trump win the White House. Facebook is finally updating its advertising policies to try to cut out some of the attention to bogus sites, and it looks like so far, they’re going down quietly.

The Facebook Audience Network already bars display ads in sites that show misleading or illegal content, but it added fake news sites to the list. While this might not necessarily keep misinformation from spreading on people’s feeds, the hope is that it could possibly keep fake news sites from making money from Facebook ads, and hopefully curb the incentive to perpetuate the misinformation. These sites might have had a lot to say about Hillary Clinton during the election, but now they’ve gone awfully quiet when it comes to this Facebook ban.

Instead of trying to ridiculously warp news about the Facebook advertising update into something that helps their agenda, many of the fake news sites have totally skipped over covering it. For example, a site called 70 News got caught spreading false data about the popular vote, and even being a top Google search result for “Final Vote Count 2016.” On Tuesday, it has run several stories, including one about supposed rape threats targeted at Melania Trump and Clinton’s behavior on Election Night, but no news about the Facebook ban.

And one of the key sites in the hub of pro-Trump, fake news sites, run by teenagers in Macedonia, is also quiet. The network, which included sites like World Politicus, ran on ad revenue generated from shareable, clickable, fake news. World Politicus’s homepage today completely lacks anything about Facebook’s advertising policies change.

Meanwhile, many of these sites had a field day when a Gizmodo report from earlier this year revealed that Facebook employees suppressed conservative news. Yet, they’ve been silent about reporting on Facebook’s new efforts to filter fake news.

Trying to reframe the stories about tech companies attempting to stop the spread of misinformation could prove to be difficult for these fake news sites. They might incriminate themselves, or spark an interest in readers to double check facts. So it only makes sense they’ll continue to make the money they can off ads before getting cut from the Facebook Audience Network.

More like this
Gear
Oct. 1, 2022
Everything you need to know about Meta’s Quest 3
By Jackson Chen
Culture
11 hours ago
Rings of Power's biggest weakness makes it the anti-Game of Thrones
By Jake Kleinman
Culture
Oct. 1, 2022
Why Patagonia’s “purpose” model reveals fashion’s biggest hurdle to sustainability
By Ken Pucker and The Conversation
Share: