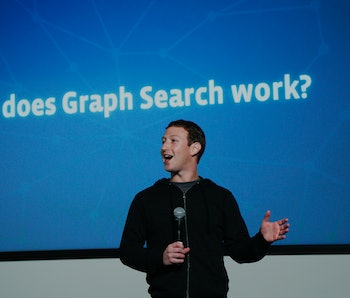 Facebook sucks at filtering out fake news from users’ News Feeds and Mark Zuckerberg knows it. The social network’s CEO said the company can “do a better job” dealing with bogus stories in a status post on Tuesday afternoon.

Zuckerberg acknowledged the role that the News Feed plays in the reading habits of an increasing majority of people who get their news online. The social aspect of Facebook, Zuckerberg says, helps ensure that users are exposed to a wide range of sources and different biases.

The reality is a little more complicated. Facebook was widely criticized after users learned that it had been suppressing conservative news, but the company’s current, entirely algorithm-driven strategy promotes obviously false stories. Even if, as Zuckerberg claimed in a follow-up comment, “News Feed is already more diverse than most newspapers or TV stations a person might get information from that have a single editorial view,” it’s not worth much if they’re surrounded by BS.

Facebook traditionally tries to shy away from any implication that it’s a media company, rather than a tech company, but Zuckerberg is at least acknowledging the site’s role in how people access journalism, and where it needs to improve.

“We can help by doing a better job filtering out false information or clickbait,” he wrote. “We’ve made some changes to the News Feed algorithm, and we’re constantly trying to get a better understanding of what our community finds valuable and what it doesn’t.”

Elsewhere in the comments, Dex Torricke-Barton, the head of communications at SpaceX and a former Facebook employee, also chimed in to call News Feed “a critical piece of communications infrastructure for the planet.”

SpaceX accidentally blew up Facebook’s $195 million satellite when their rocket exploded during a test last week, so that comment might’ve been a bit of an attempt to get back into Zuck’s good graces.