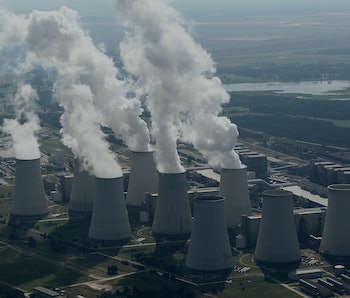 If you plan on spending the rest of your life living on Earth, well, things aren’t looking great. Climate change is a reality, and President-elect Donald Trump is almost certainly going to kill the Paris agreement. There’s some good news, though — a group of kids and teens won the right to sue the government and fossil fuel industry for destroying their future.

On November 10, a U.S. district judge in Oregon ruled that a group of 21 youths, ranging in age from 8 to 19, had the right to sue President Barack Obama, the fossil fuel industry, and other federal agencies for perpetuating climate change. As Judge Ann Aiken wrote in her order, the youths had the right to argue that polluters had violated “their obligation to hold certain natural resources in trust for the people and for future generations.”

“This is no ordinary lawsuit,” she wrote.

The group, Our Children’s Trust, first filed suit in 2015, with renown climate scientist and advocate Dr. James E. Hansen joining their cause. In April of this year, U.S. Magistrate Judge Thomas Coffin first denied the fossil fuel industry and government’s predictable motions to dismiss the suit against them. They appealed it, which was also predictable. Less assured was the likelihood that Aiken would also deny the government’s motions.

Luckily, Aiken did indeed throw out the defendants’ claims to dismiss the suit, and in her order, she explained why this is such a landmark case. “This action is of a different order than the typical environmental case,” she wrote. “It alleges that defendants’ actions and inactions—whether or not they violate any specific statutory duty—have so profoundly damaged our home planet that they threaten plaintiffs fundamental constitutional rights to life and liberty.”

Now these kids officially have the right to sue the forces responsible for harming the planet they’ll inherit, it’s time for the case to actually go to trial. Judge Aiken noted in her order that there was to be no debating about whether the climate change was caused by human activity. “For the purposes of this motion, those facts are undisputed,” she wrote.

It’s good to hear that the case, as it proceeds, won’t waste time on that long-since settled issue, since, as 17-year-old plaintif Victoria Barret said in a statement, “our planet and our generation don’t have time to waste.”

“If we continue on our current path, my school in Manhattan will be underwater in 50 years,” she added.

“My generation is rewriting history,” said 16-year-old Xiuhtezcatl Martinez. “I and my co-plaintiffs are demanding justice for our generation and justice for all future generations. This is going to be the trial of our lifetimes.”

The suit currently names President Barack Obama, but one imagines these brave, young climate activists will have their hands full with a Trump administration as well.